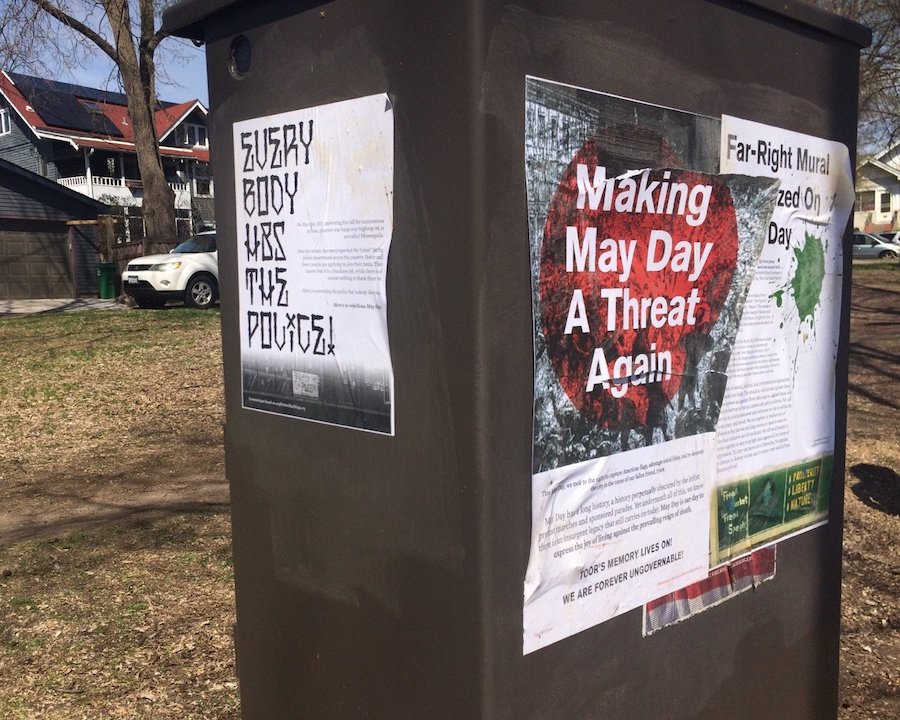 May Day in Minneapolis is a unique experience. May 1st is known around the world as an anti-capitalist holiday. This tradition exists here as well, although like many cities in the so-called United States it has been severely tamed. However, the big attraction is the first Sunday’s May Day parade and festival. These festivities instead primarily draw their inspiration from the far older pagan traditions of welcoming Spring.

This year, 2019, a call was made for “autonomous and decentralized” actions on May 1st, drawing on these twin legacies, pushing to give them “new life.” And indeed, as the sun rose on May 1st, anti-fascist graffiti was seen adorning the city. A banner against the police was displayed over a highway. One crew claimed numerous acts of sabotage and vandalism overnight. At the same time, several signs had the name Lake Calhoun erased, in defiance of the legal system’s decision. And these are only the actions that were publicized in some way.

To communicate about an action is to undo the silence imposed when the streets are tidied up. The term “social peace” is often used to describe ways in which conflict, particularly political conflict, is obscured in favor of appearing as a harmonious and smoothly functioning society. While actions indeed speak for themselves, communicating about them amplifies their words.

These coinciding events around May Day provided a clear opportunity experiment with this communication. On the night before the festival, posters with different reports about actions on or around May Day were wheatpasted around Powderhorn Park. The goal being, as the park fills with people on Sunday they will be able to directly encounter word of these actions, without having to follow certain hashtags or check certain websites. And by doing so, contribute an element of combative joy to the festivities.