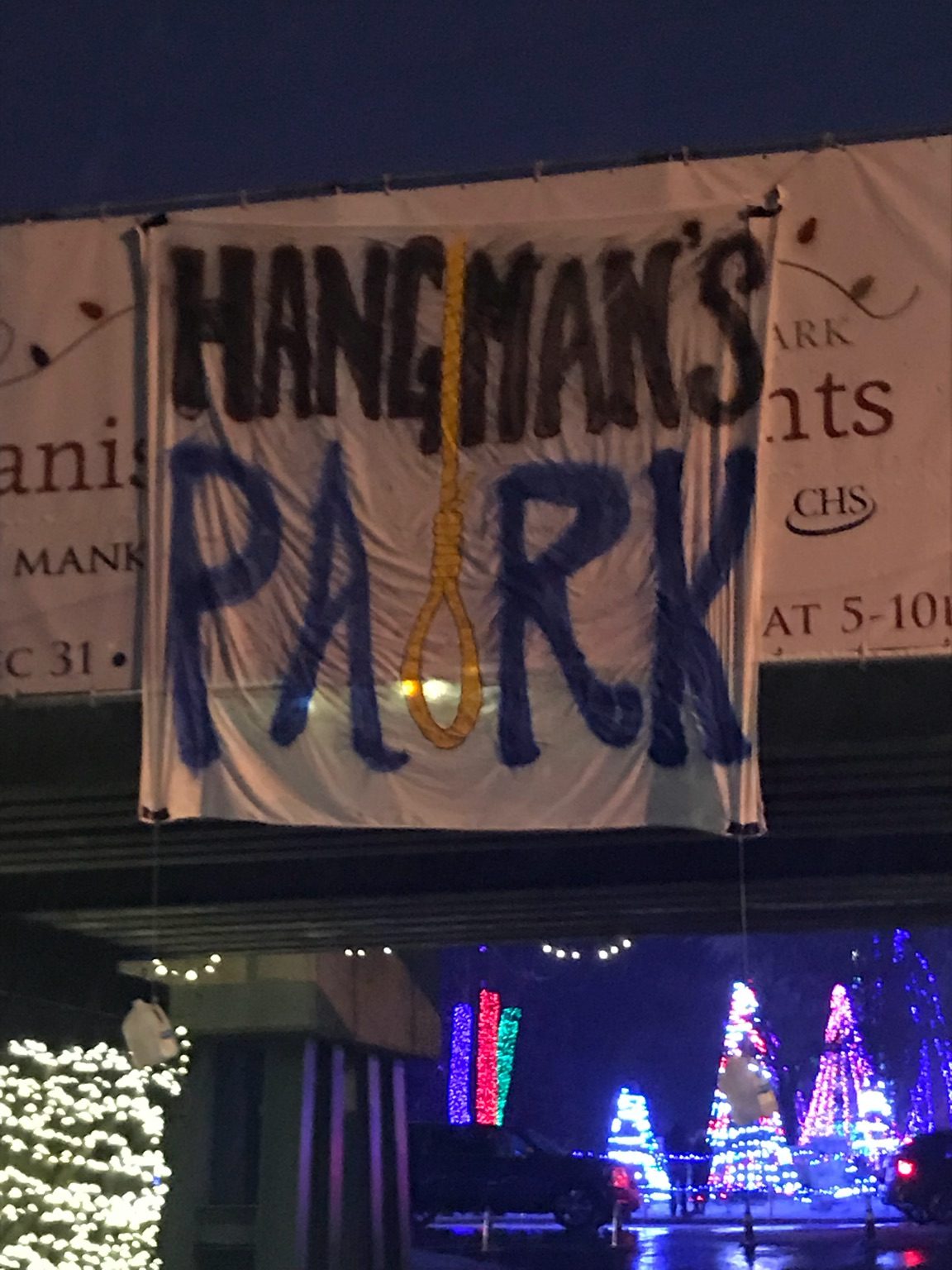 Mankato, MN—On December 26th, 2018, a tripod with a noose around an Abraham Lincoln figure was erected at so-called “Sibley Park.” The banner dropped from a nearby railway bridge reads “Hangman’s Park” with a large noose in the middle of the banner. “What happened to our ancestors here and afterword was a heinous crime against humanity, and was apart of an inhumane campaign to remove and ultimately eliminate Dakota people from the newly formed state ‘Minnesota.'” We mourn for the 40 Dakota people who were hung today 156 years ago, but also the hundreds of prisoners who were kept against their will, and thousands of Dakota people held captive and forced to march out of Minnesota. Where we stand is named after General Sibley, who played a major role in the Dakota wars of 1862 and with Abraham Lincoln’s support, sent 38 Dakota men to be lynched in the largest execution in United States history” says a masked ALD member.
During 1862, tensions were high between Dakota people and the settlers that forced themselves onto Dakota territory. The treaties made with the Dakota’s restricted people to land that was not sustainable for survival. These unfair treaties were often not understood by signatories, but through bribery and warfare, the United States Government forced signatures to documents that left Dakota people with no choice, other than to fight for survival. The Minnesota regiment took orders from Gen. Sibley who Governor Ramsey told the regiment to carry out with atrocities against Dakota people that if happened today, would be considered a genocidal and ethnocidal act.

“There is not an accurate number of the lives lost during the westward expansion of the colonial state, and so we tied red prayer ties to the top of this tripod to represent the blood that was shed, as well as the deaths President Lincoln, Governor Ramsey, and General Sibley, are responsible for. These men are war criminals and should not be celebrated.” said another masked ALD member as the tripod is erected. Echoes of “Blood is on your hands” and “Dakota 38 = genocide” are chanted by people who have gathered around the tripod. People hold signs reading “Remember Dakota 38 +2”.

The aftermath of the war led to an immediate formation of a military commision that sentenced over 300 Dakota to death by hanging. Most of the Dakota being tried, did not speak English, nor did any have any counsel defending them. Also, the military commision consisted of those who had fought in the war against the Dakotas and had obvious biases against the people who were being tried. In retrospect, many believe the military commision was illegitimate, but that did not stop Abraham Lincoln from reviewing the convictions, as it was a “military proceeding”. Abraham Lincoln was commander and cheif, as well as an established lawyer. He knew the illegitimacy of the military commission and could have proceeded differently, yet instead of releasing them all, he sent Dakota men to hang for crimes that were likely not commited by the Indigenous capitives. Four thousand settlers came to Mankato town square to see the Dakota men executed, and in the process, 2 other men were hung that day by “mistake” totaling 40 including an adopted white man. Their bodies were temporarily buried by the Minnesota River, (where Reconcilliation park now is) then their bodies were exhumed and sent various places for “scientific research”. This event is just an example of the hundreds of battles and injustices that took place accross the Western Hemisphere during the invasion of colonial forces. Till this day, Indigenous people of Turtle Island and elsewhere are continuing to fight for our ancestral homelands as we have always done.