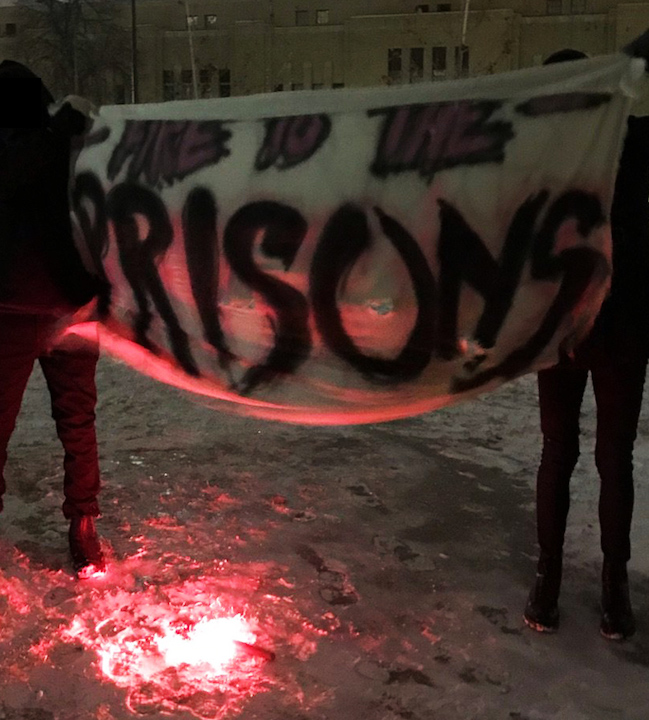 Every year, people around the world gather outside of jails, prisons, and other detention centers and make noise to remember those who can’t celebrate the new year with the rest of us. This year, a small crowd gathered outside the juvie in downtown Minneapolis and set off a number of loud, colorful fireworks for those locked up to enjoy. When the fireworks ended, the crowd dispersed into the cold winter night.

This year, prisoners across Minnesota have really raised the bar for what resistance can mean. While there was no reported activity around the August 21st strike, numerous brave acts of rebellion were taken all year by those who refused to be treated as slaves. Assaults on guards have taken place at a number of prisons and jails since March up until the last days of the year. Even the vast repression following the death of a prison guard at rebel hands did not dampen their resistance, which also manifested in a more than one hundred-strong collective work refusal on the last day of November. Meanwhile, the state and the prison guard’s union are working hand in hand to find the most efficient ways to deprive these prisoners of their dignity. It is up to all of us to rise to this occasion—to really demonstrate what it means to have the backs of those on held captive by the state. Of course, no single action could ever accomplish this task.

New Year’s Eve is also for us. It can be a measure of our own collective capacity; the potential of our relationships as they grow over time to manifest as a force in the streets. It is a place where we can develop a tactical intelligence, without needing to attend to the urgency of a social rupture. Not least of all, we establish new traditions that constitute the emergent worlds we are building.

Here’s to many more manifestations of these worlds in 2019.

Until every prison is ashes under our feet.