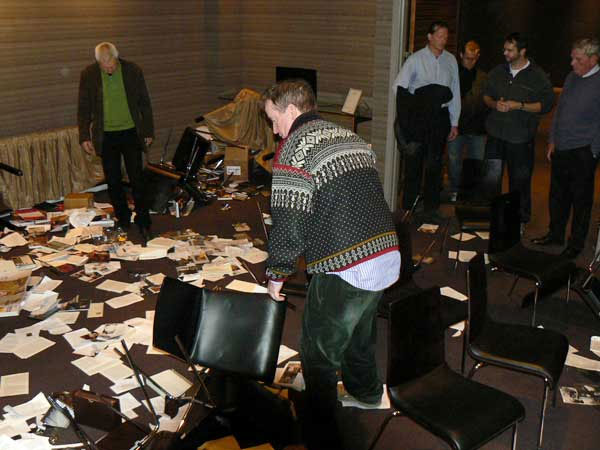 The following report comes from some comrades in Minneapolis:

On November 16, 2012, David Irving, renowned Holocaust denier and Hitlerite disciple (though he prefers the phrase ‘controversial historian’) attempted to hold an event on his speaking tour, “Hitler and I,” at the Graves 601 Hotel in downtown Minneapolis. The Twin Cities, which has decades of successful antifascist and anti-racist organizing behind it, was ready for him. In a display of mass, disciplined, and coordinated action, we stood in defense of our fellow human beings.

Irving’s events have long been focused on four goals: the talks provide Irving with a venue at which to profit heavily from his work, both the books and movies he sells as well as from ticket sales for the event. Additionally, and of greater concern, these events legitimize fascism in the public eye, provide networking opportunities for local white supremacists and fascists, and provide infusions of cash to local fascist groups. The antifascists of Minneapolis and St. Paul recognize the real and present danger such events pose to our communities and loved ones, and organized to disrupt Irving’s event.

Having gotten past the lobby and up five floors of hotel elevators, we entered the room approximately 60 strong. While some antifascists videotaped attendees to help us identify local fascists, others seized the opportunity to destroy his books and dvds, depriving both him and his fascist sympathizers of much-needed funds for their violence and hatred.

Irving and his cronies are attempting to research members of the antifa crowd, posting their photos on his page, comparing to Facebook and other social and local media, and offering rewards. Their attempt to intimidate the people on the basis of their hateful property points out the common collusion of the fascists with law enforcement and the principle of capitalist profit. But not to worry: for the most part, their ‘intelligence’ is at the quality you’d expect of people often referred to as ‘boneheads,’ and has amused the local community, which long ago overcame its fear of fascists.