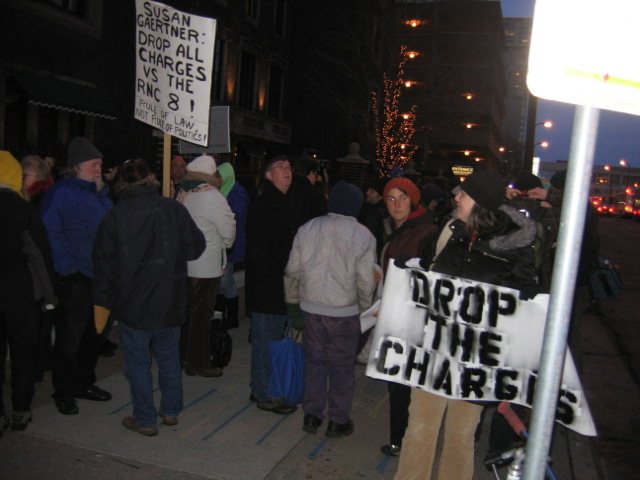 dusk on a december tuesday, barely warm enough to emerge from our (barely) heated abodes. the suited democrats descend on the swanky minneapolis club, expecting a calm entrance to susan gaertner’s birthday fundraiser for her gubernatorial campaign, but alas! the iron gates are surrounded by the rabble, an angry mob of the dispossessed and their defenders. the suits push through, ignoring our festival. these ruffians, armed with a sound system and raucous tunes, cast a spell of momentary liberation outside this fortress of the rich. the panopticon watches: the ubiquitous surveillance camera and two cops guard the door, allowing only the monied minneapolites through. someone tries to deliver a singing telegram to gaertner, but they are turned away. a banner is dropped from a parking garage, but quickly removed.

the crowd exudes life and rage, in stark contrast to the drab professionals waiting for busses, and the ominously shiny skyscrapers. we are dancing and hollering and watching each other’s backs. the filth drift in, tension rises but the unbirthday celebration continues. one pig emerges from the building, tells us to shut off the sound system, but he is alone and surrounded by people chanting “drop the charges!” the music stops for a moment but soon begins anew. an unmarked van full of pigs arrives, then a “booking van” parks nearby. the filth pull out zip ties, itching to fill their arrest quota, but still they make no move. they order us to disperse, and we move the dance party around the corner. they repeat the dispersal order: we repeat the move.

for once, a relief from the drudgery of recuperation! so many put in chains by the police state, and so many years faced in jail. for a community struck by infiltration and repression, we managed to prove ourselves unintimidated. if the state means to crush our resistance through their legal system, we mean to struggle ever harder. gaertner may try to ride into the governor’s office on the waves of felony convictions, but we plan on exploiting every point of tension we can, turning the cracks in society into ruptures.

DEVASTATE the avenues of the rich! DEPOSE all politicians! vote YES on CIVIL WAR.