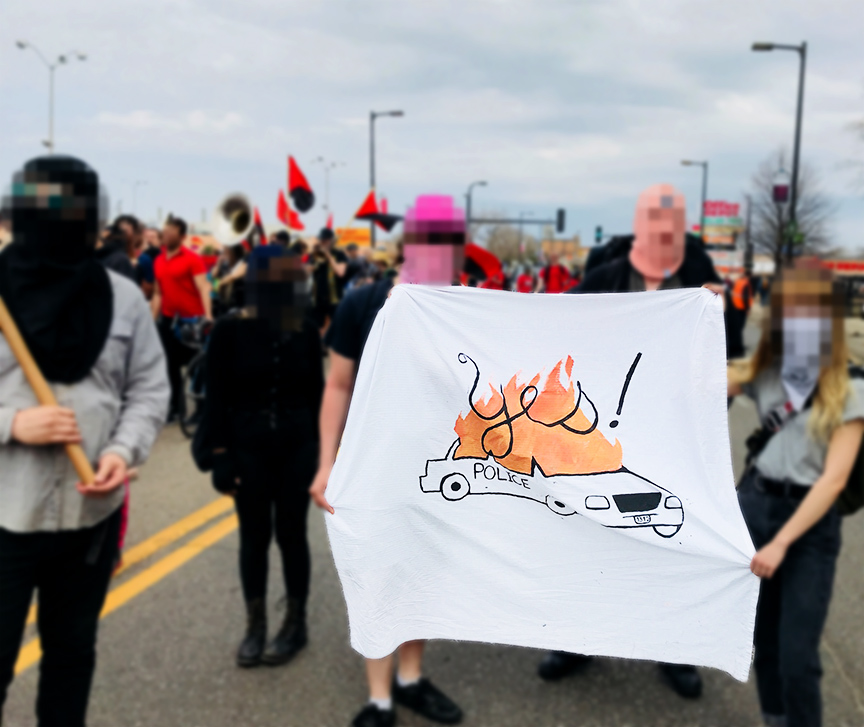 This year, a few of us decided that even if we didn’t have much of a plan for May Day, that we were none-the-less determined to have a presence at the May Day march on May 1st, which for as long as people can remember of the recent years has been dominated by leftist organizations like the Freedom Road Socialist Organization/FRSO (a soft Maoist sect), their front groups and others who willingly play along with this sad circus.The circus goes like this: arrive and stand around your little sect if you have one, someone gives you a newspaper or a flier for their next event, signs you up for something, round after round of people talk at you, so much so that you can barely keep awake, then you slump along since in reality it can hardly be called a march, sometimes there are chants, they speak in confusion and accentuate our collective awkwardness, more speeches, more chanting, all so orderly, and one feels their aching lack of power, the power that should be collective, is driven by sadness into our individual bodies. And by ideology, weak thought or sheer will we march on, miraculously even showing up again the next time to receive our lashes.

This time we met, masked up and marched behind a banner featuring a flaming cop car with only the word “yes!”, which was a reference to a banner made and marched behind during the Trump inauguration protests that was a black sheet with only the word “no.” painted on. There’s a little conversation going on here between the two. One emphasizes negation and another affirmation. As revolutionaries we must bow to both. We always contain within us the power to say as Bartleby did “I’d rather not” or “not this time mother fuckers!” We must also affirm what is vital, what is worth living for, what is unique and different according to our taste, and importantly the how of our ethical dispositions. The mobile sound system played pop music and anti-police hip hop. Sometimes this interfered with the sound of the speeches, sometimes it cut through the silence, sometimes it set the tone. Though small, these were attempts to add an open and unruly energy to the event, which the organizers work hard to contain and thwart. Even the peace police sensed a potential (if only symbolic), as one young man nervously and sadly stood arms outstretched between a few in bloc and a police car as we flicked the police off and a few minutes later between us and a wall to prevent the wall from being sprayed, while we weren’t even considering it. They think anything is possible, we simply need to give belief materiality.

We won’t lie and say that it felt great to be there as the awkward extreme end of a protest knowing full well that our lives do not justify protest. We know we’re at war. Our enemies know we’re at war. What is achieved by polite and orderly wimperings of indignation, but a call to better manage the catastrophe? The parade itself seemed a fairly weak showing for all present, as clearly others don’t go and expect to feel their own power there either, so they don’t go. We write to ask ourselves and others what would it take to feel like we aren’t weak, to feel that there is a stake in living, in our commitments to each other and the worlds we share? In the past, marches meant “do not fuck with us” or “we will burn down parliament.” A demonstration demonstrated not our ability to listen to boring speeches and be corralled by police and then go home, but our power to make or unmake worlds (or at least the threat and manifestation of a physical desire to do so). A speech instead stoked an ember that grew to flame. And the powerful trembled because they knew we were also powerful.

Aside from grand words, how do we get there?

It starts by building from where we’re at and recognizing what could be done better. It means starting from a small crew and coming with a bigger crew, multiple crews and affinity groups. There were several random people in the crowd that seemed to want this too. They came alone and bloc’ed up by themselves and gravitated toward us. We decided to be present to make it known that we desire this with others, that we invite you to come the next time there’s a call. You don’t have to wear all black or even cover your face. Bring your friends. Practice staying close and building your trust in each other. Simply being together with others who practice this art as a responsive crowd opens the situation up to other possibilities. For the purpose of breaking down the barriers between those who would bloc up and others who weren’t we decided to attempt a “casual bloc.” Admittedly this is something new to us or perhaps we just have too many black clothes, so instead people were mostly a poorly done black bloc rather than a casual bloc. This distinction doesn’t necessarily have be made along the lines of whether black is worn or not. It is determined by the open character of the bloc—essentially what makes it feel like something others can see themselves within. If covering one’s face is not simply an aesthetic practice of a revolutionary subculture but a necessity for confrontational practice then it needs to become a practice shared by all who desire to engage in militant resistance despite identification. Space must also be made for varying levels of risk to coexist within a bloc. It must be acknowledged that those who come just to be in the street, needing to to leave in the event that the situation becomes too risky still allows for others to hold the streets with them that much longer. There as many ways to be unruly as we can imagine and being a bloc is only one experiment among others. Our intention is to open that door.