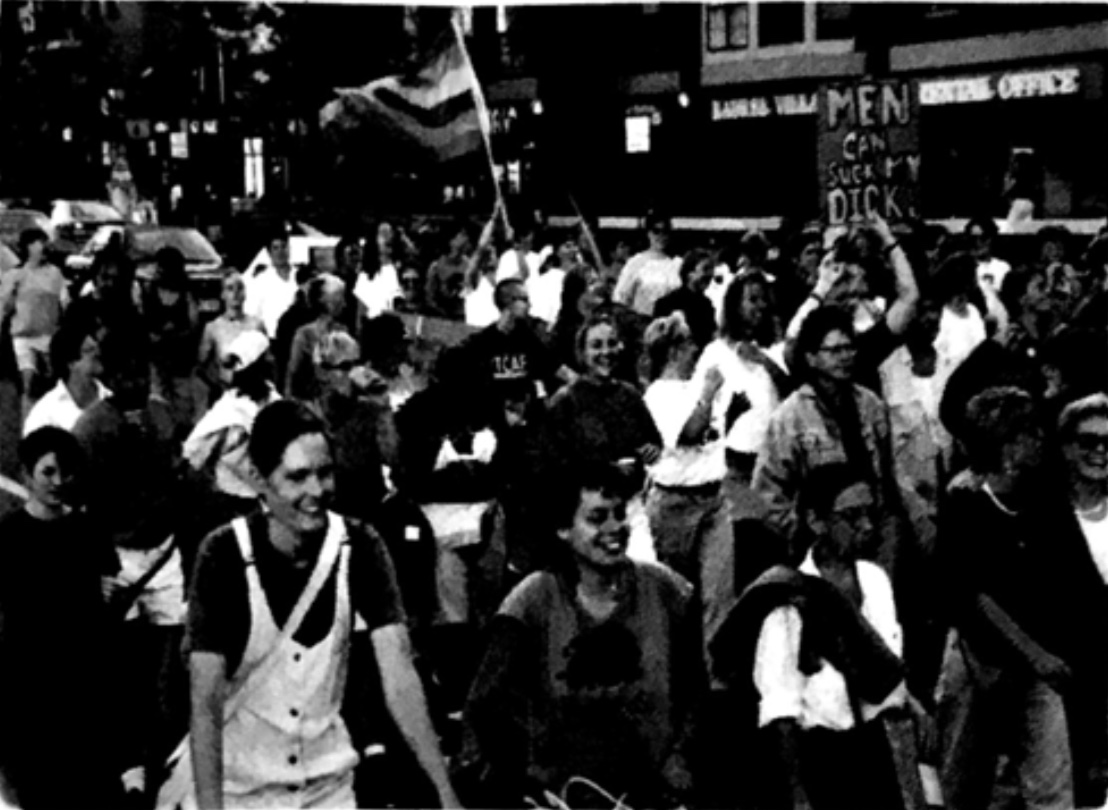 For the second year in a row, hundreds of dykes took to the streets of Minneapolis in an unpermited display of frisky and militant less energy on Saturday, July 9, the night before the official and comparatively milktoasty LGBT Pride Parade.

Sounds of drumming and the rev of motorcycle engines rallied the women who collected in Loring Park in front of Amazon Bookstore. As the march stepped off, somewhere between 400 and 700 dykes, lesbians, gay women, bi women, queer women and a smatter of queer guys chanted, hooted, toted signs and caught street chalk being tossed out to them to use for civic beautification along the way. The march streamed onto Hennepin, then over to 12th and up Nicollet as Dyke March marshals—wearing armbands sporting such monikers as Carpet Muncher, Muff Diver, Ball-Busting Dyke and Sodom & Gomorrah Tour Guide—stopped two lanes of traffic, held intersections, and stalls the cops along the way. About a dozen gay men kept appearing and reappearing along the march route sidelines, yelling and carrying signs reading “Cocksuckers for Muffdivers,” “Dykes Rule,” and the like, much to the entertainment of the women marching.

The march, organized by the Lesbian Avengers, was to be a spontaneous expression of whatever women showed up. Two possible march routes were suggested, to be decided upon depending on the numbers of women present, the collective energy, and the rapidity with which the cops figured out and attempted to quash what the marchers were up to. Dykes on bikes led the way and circled around the throng, picking up info from marshals about which route women wanted to take next.

Officers attempted to shoo the women off the streets and onto the sidewalks, but fortunately most marchers totally ignored the police and continued along Hennepin avenue until the finished what they set out to do. Avenger marshals distracted a cop who wanted to know who organized the march, where it was going, and who he should collar for a report. The interchange went something like this: Cop: “What is this?” Dyke: “A dyke march.” Cop: “Don’t you have a march tomorrow?” Dyke: “Yep.” Cop: “Then what is this?” Dyke: “A bunch of women who wanted to march tonight.”

At the end of the march four dykes ate fire in memory of the Oregon Martyrs, a Black dyke and a white gay man who were killed when their apartment was firebombed by neo-nazi skinheads during the Oregon Measure 9 anti-gay referendum fight in 1992.

Twin Cities dykes appreciated the significance of an unpermited and militant display such as this, and organizers plan to continue the march as an annual event. Minneapolis Avengers hope to work in coalition with other groups over the next year in order to schedule the march at the best possible time and to help the Dyke march represent a genuine coming together of not only enthusiastic individual dykes, but a strong collectivity of organized activist Queer women.