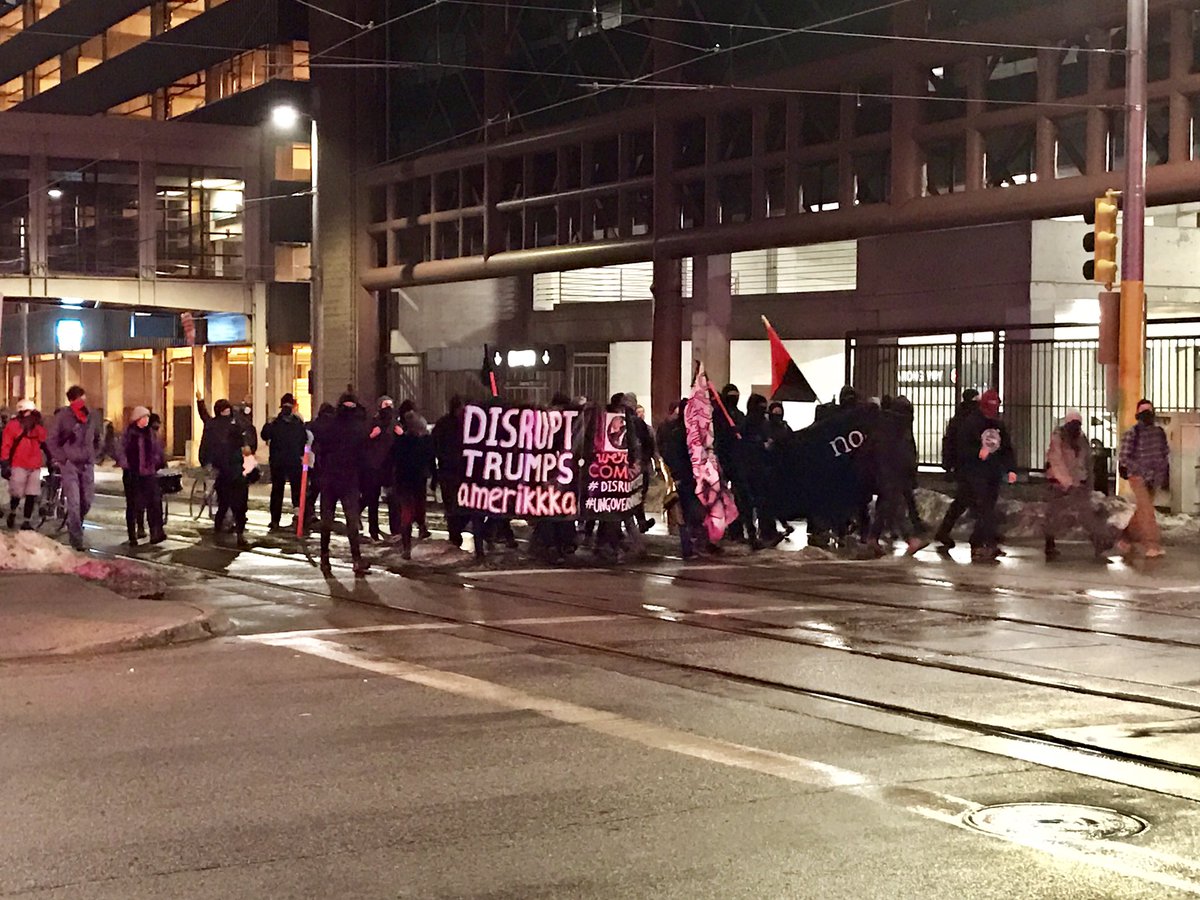 It’s finally here. Trump is to be the 45th President of the so-called United States. After a campaign based on nothing but white supremacist rhetoric, attacks on migrants and refugees, on the disabled, and on women, femme, trans, queer, and gender non-conforming folks, Trump has been granted the power of chief executive in the largest white supremacist empire the world has ever seen.

Rather than passively participate in yet another march of liberal/progressive passive resistance and the same old permitted march from point A to point B, anarchists, anti-capitalists, and anti-fascists in the Twin Cities both autonomously organized and also affiliated with the General Defense Committee contributed our own response to a Donald Trump presidency. As soon as the Black Snake Resistance march met the IWW’s ongoing blockade of Franklin and Nicollet avenue joined by indigenous residents of Minneapolis, an effigy of Donald Trump was lit up in flames. Anti-fascist speeches were given, and anarchists in the crowd urged people to “become ungovernable.” 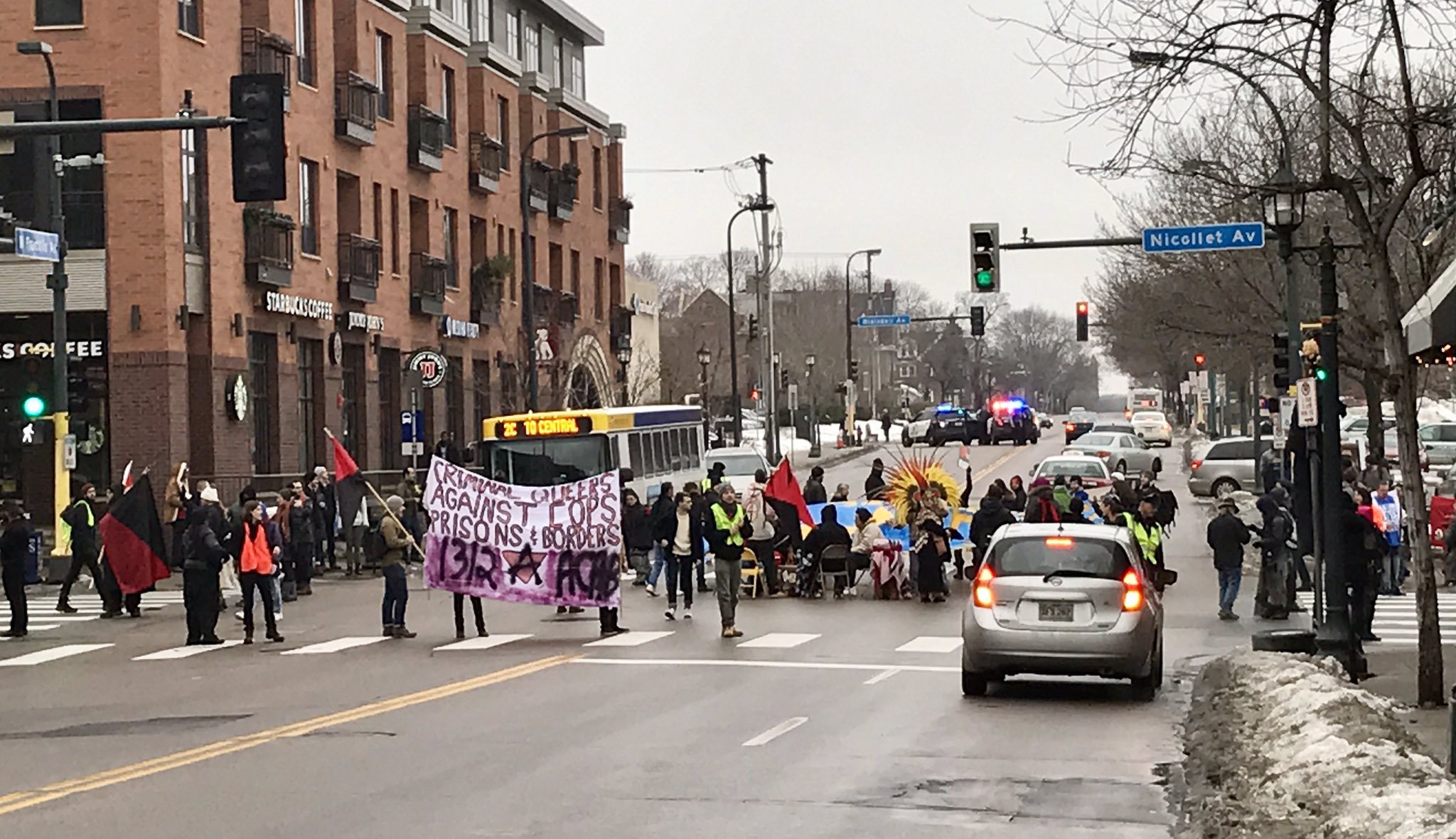 Once the Resist From Day One march joined in, it was time to head towards Government Plaza. Aside from a few caution cones dragged into intersections and verbal shouting matches with police, the march is relatively tame but people are very high energy and a desire for something more is apparent among a lot of the participants. A few fireworks were set off and nearby marchers reacted with cheers. Marchers in bloc attire were not met with any hostility but rather some confused newcomers to resistance and interested protesters wanting to know how they could do the same. A growing amount of people are showing interest in actively fighting back against fascism, white supremacy, capitalism, and the State. This is encouraging, and a welcome shift in Minneapolis protest politics, which are usually very hostile to anarchists and anti-capitalists. 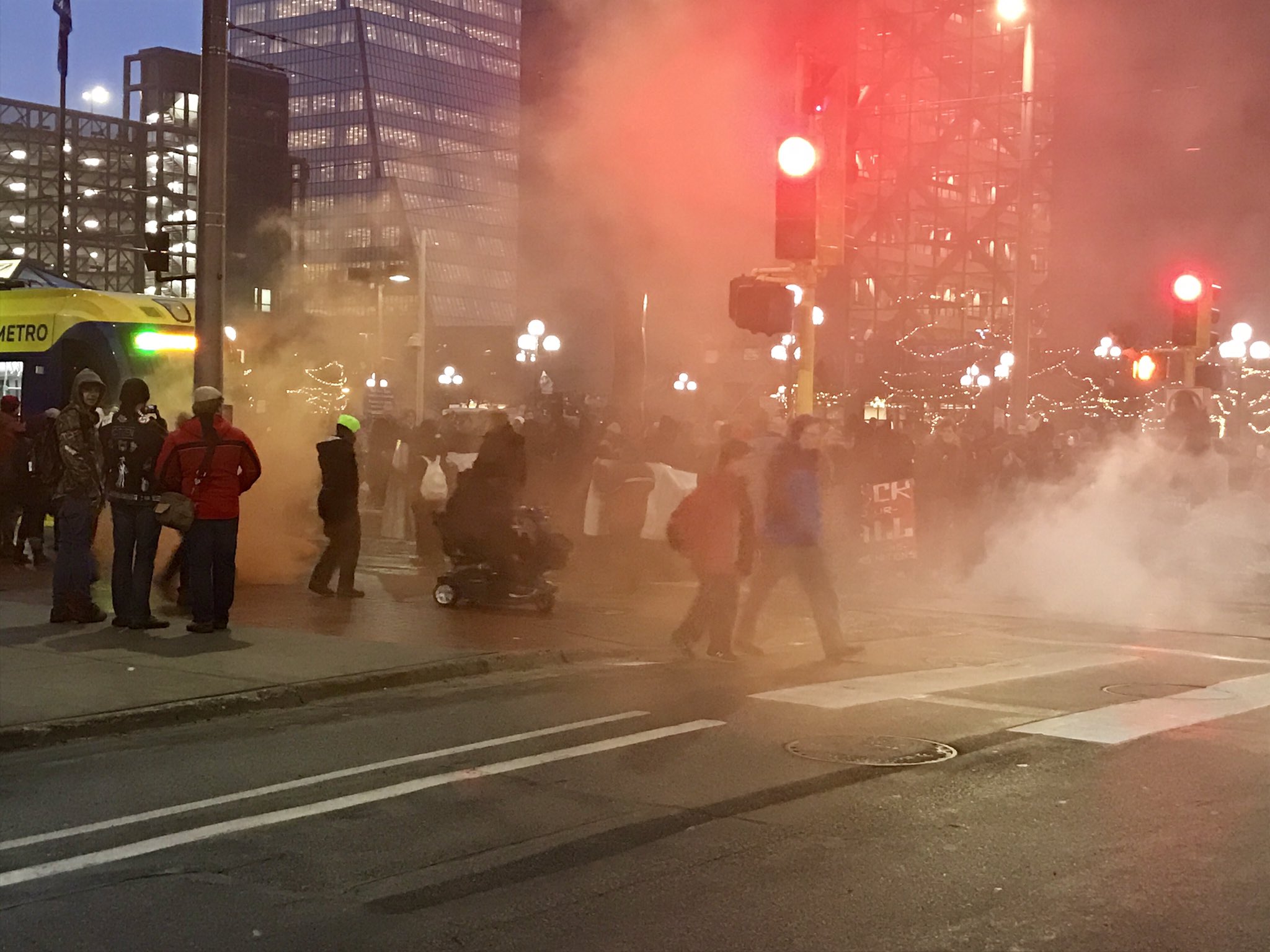 Upon arrival to Government Plaza, an anarchist contingent within the march blockaded the light rail and lit smoke bombs. A dance party on the light rail tracks attracted attention from nearby march participants milling around instead of listening to a variety of speakers meant to de-escalate. Soon enough, these self-organized marchers, most of them very young, joined in on the fun. A train read “DC IS BURNING” in black spray paint. Within a few minutes, we headed off for the youth jail. In the spirit of spreading the resistance to Trumpism both inside and outside of the razor wire, the anarchist contingent paid a visit to the juvenile detention center and lit off fireworks. Anti-incarceration and anti-police chants echoed off the prison walls and inmates pounded on their windows and raised fists in solidarity.

Upon arrival of a bicycle police squad and a police cruiser, the breakaway march continued towards the next destination. Wells Fargo, the arms dealing and private prison profiteer, not to mention it’s ongoing investment in the destruction of our planet and colonization of indigenous territory, was shown the wrath of class war. A G4S security agent (the same Pinkertons employed by Energy Transfer Partners to attack water protectors in Standing Rock and Mississippi Stand) had his phone smashed.

Brace yourselves, capitalists. Our anger is becoming incorrigible. The only answer we see to a Trump presidency is open rebellion. The increasingly apparent contradictions within capitalism are becoming impossible to ignore. It’s only a matter of time before the same desperate situations already ongoing in Greece, Mexico, Spain, Italy, and Portugal become reality here. Climate chaos will only intensify, even if we didn’t have a climate change denier as President. People of color will continue to be gunned down by police and incarcerated at alarming rates. Migrants will be deported at an even more accelerated rate than they are already by the now finished Obama administration. The only way out is class war.

Towards the victory of the Minneapolis commune