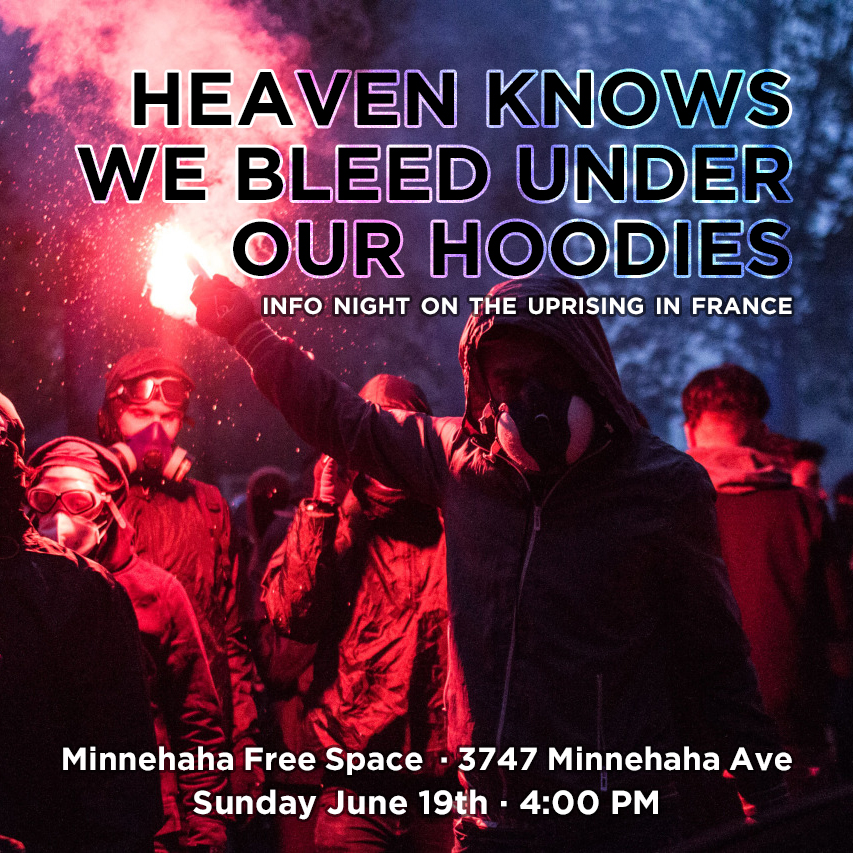 Come learn about and discuss the current uprising in France against the labor law and its world. Translated texts from France will be available to read and we’ll watch video clips from the uprising. 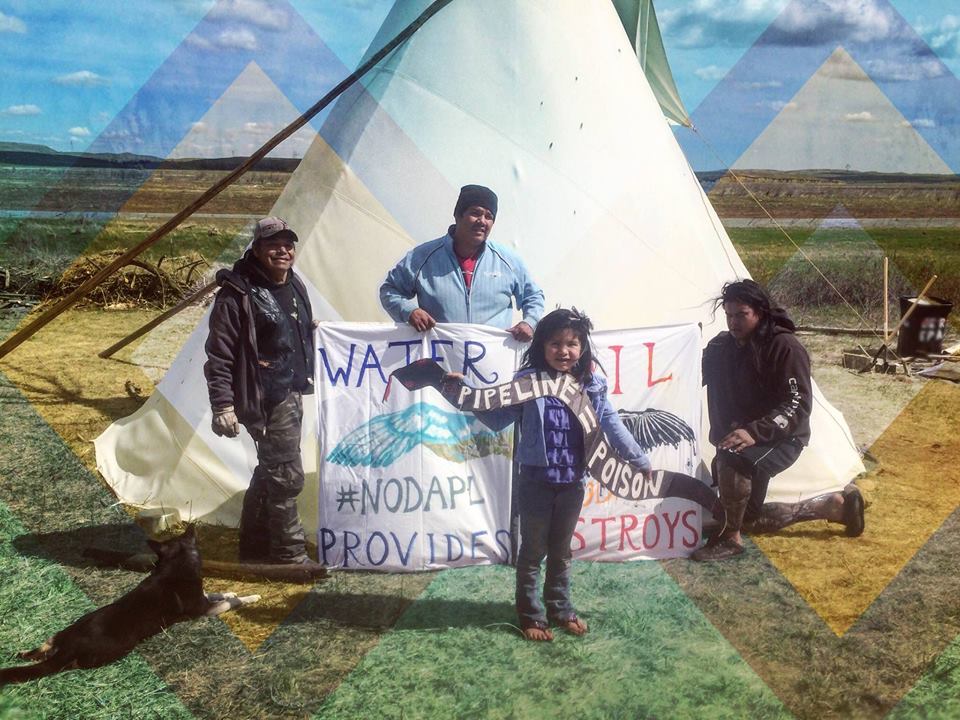 On April 1 2016, the Standing Rock N/L/Dakota Nation part of the Oceti Sakowin (Circle of Seven Fires) situated in occupied Cannon Ball, ND, have set up the Iyan Wakanya Gagnapi Oti/Camp of the Sacred Stones to build community, pray, and defend their territory from the Dakota Access Pipeline (DAPL).

The DAPL is proposed to transport as much as 570,000 barrels of crude oil per day from the Bakken oil fields in North Dakota crossing the Missouri River twice, through Standing Rock reserve lands and sacred sites, on to South Dakota, Iowa, and Illinois.

The pipeline route threatens significant sites of historical and cultural significance to many Northern Plains tribes, including the Lakota, Dakota, Mandan, Arikara and Cheyenne.

The place where pipeline will cross on the Cannonball is the place where the Mandan came into the world after the great flood, it is also a place where the Mandan had their Okipa, or Sundance. Later this is where Wisespirit and Tatanka Ohitika held sundances. There are numerous old Mandan, Cheyenne, and Arikara villages located in this area and burial sites. This is also where the sacred medicine rock [is located], which tells the future.

The dangers imposed by the greed of big oil on the people who live along the Missouri river is astounding. When this proposed pipeline breaks, as the vast majority of pipelines do, over half of the drinking water in South Dakota will be affected. How can rubber-stamping this project be good for the people, agriculture, and livestock? It must be stopped. The people of the four bands of Cheyenne River stand with our sister nation in this fight as we are calling on all the Oceti Sakowin or Seven Council Fires to do so with our allies, both native and non native in opposing this pipeline.

Join us Monday, May 16 at the Minnneapolis American Indian Center to hear a reportback from the camp, meet folks from the frontlines of North Dakota as well as from Honor the Earth and discuss uniting our region to support indigenous communities and resist oil infrastructure. 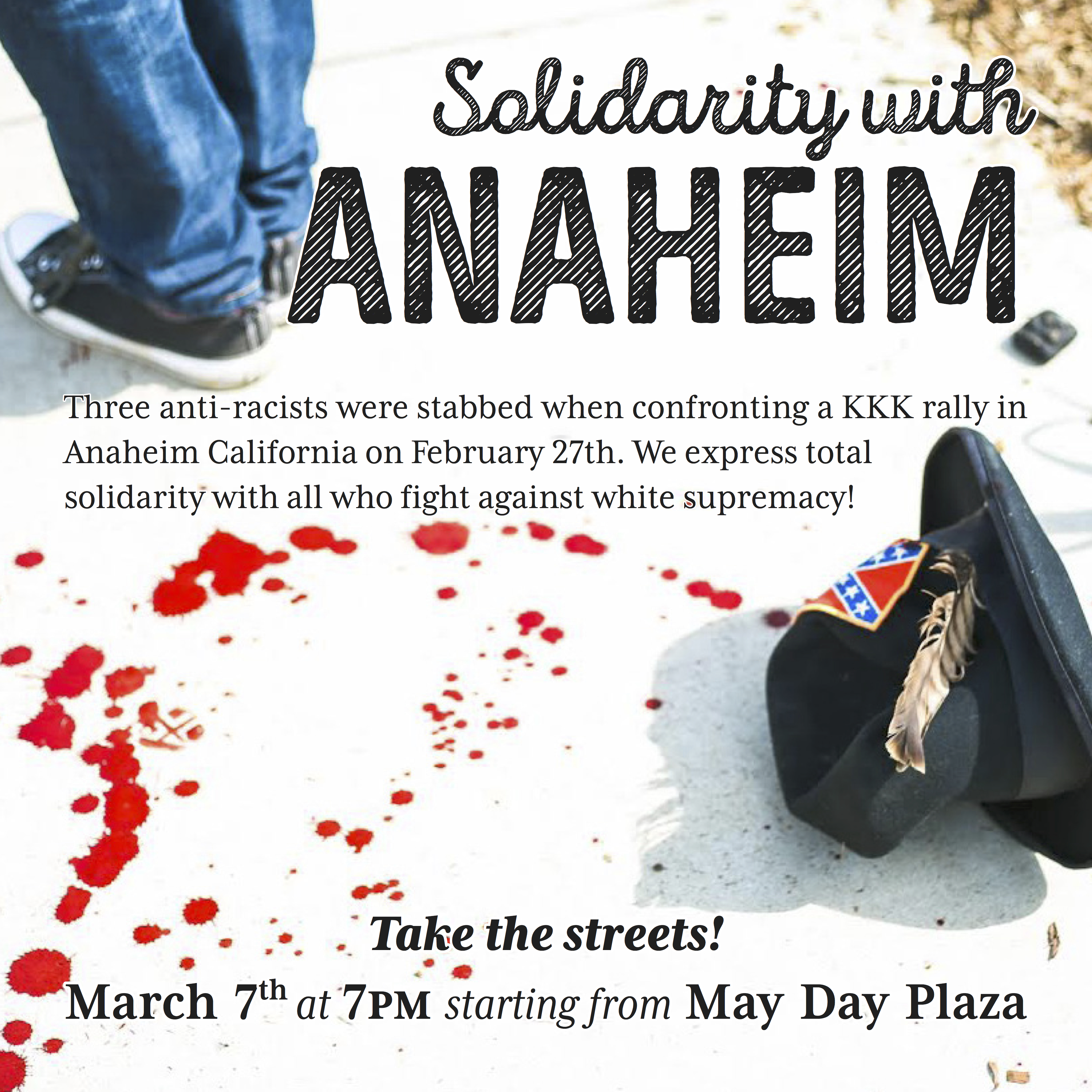 Saturday, February 27th, a KKK rally was confronted in Anaheim, California. Fighting quickly broke out and left three anti-racists stabbed. In Minneapolis we are very familiar with this escalating white supremacist violence, and express total solidarity with those who stood up to the Klan.

Donate to their legal and medical bills here! 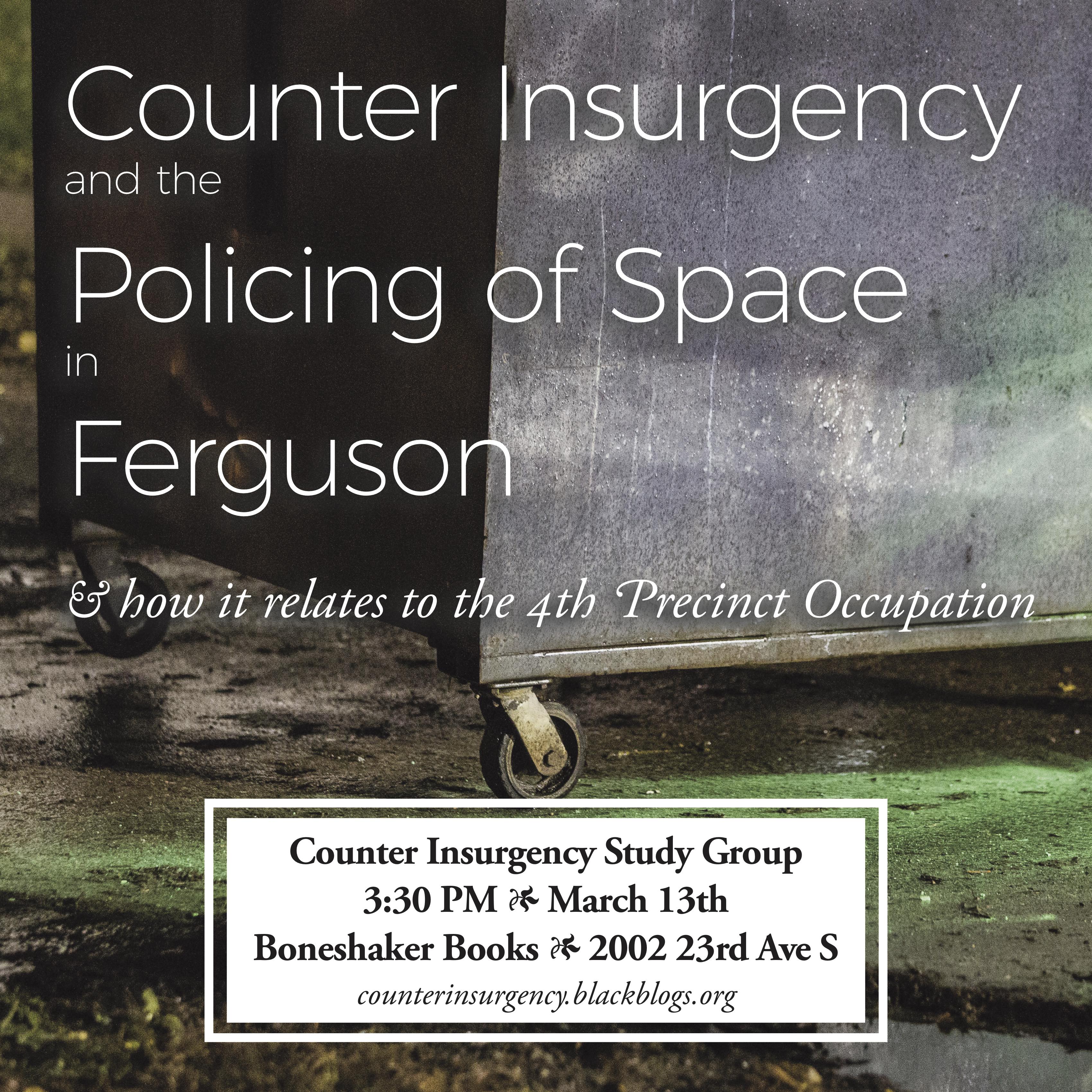 The policing and containment of the Ferguson uprising was effective through the deployment of a complex strategy of spatial control — one that effective redrew geographical boundaries of the city and neutralized advantages held by militants in the conflict. How can we use this analysis to study similar operations in Minneapolis, with regard to the 4th Precinct occupation at the end of 2015? 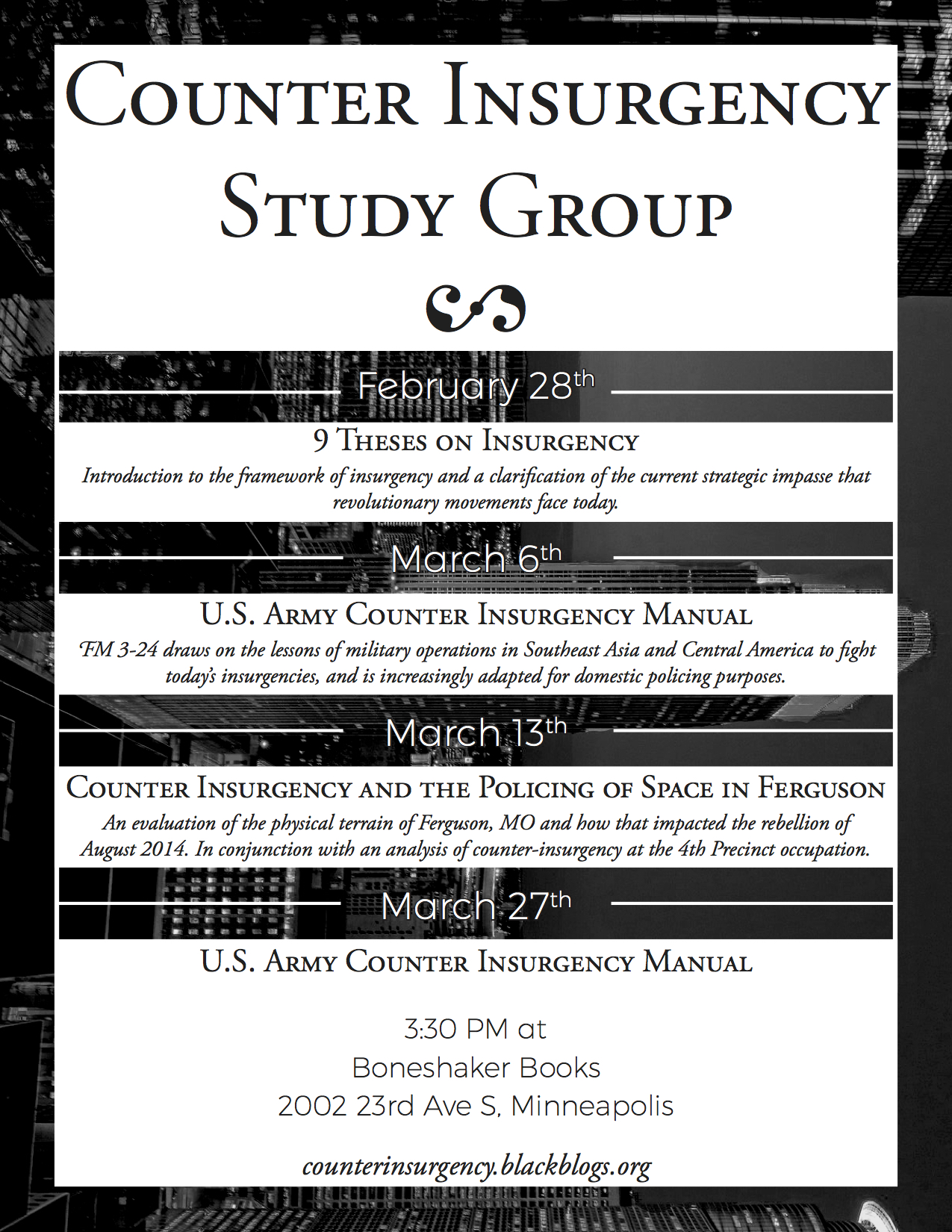 Sundays (Except the Third of the Month)

Today, the revolutionary project remains stuck between ineffective activism and resignation. We intend to break out of this impasse.

As revolts catch fire across the globe with a quickening pace, they are snuffed out just as swiftly. The strategies honed by the state in the jungles of Vietnam and the mountains of Iraq are adapted for deployment in the streets of Ferguson, Baltimore, and our own cities. In their eyes, every one of us is a potential insurgent resisting the control of the social order. Repression can no longer be met with the indignation of a victimizing narrative, it must be understood as the logical action of a partisan whose interests clash with our own: the action of an enemy.

We hope that by reading and discussing the topics of insurgency and counter-insurgency that we can act in a more decisive manner upon the terrain we find ourselves in.

Check out the timeline for a list of readings and dates. The designated reading will be read aloud in the group followed by a discussion. Several print copies of each text will be available, and digital versions will be available from this site.

For those unable to make the first session but wish to join later, we strongly encourage you to read Nine Theses on Insurgency beforehand.

To get involved or drop us a line: counterinsurgencymn@riseup.net January 22, 2016 will be the first annual Trans Prisoner Day of Action: an international day of action in solidarity with trans prisoners.

This is a call to action against the system which seeks to erase our very existence. The survival of trans and other sex and gender minority people is not a quaint conversation about awareness, but a struggle for us to live in a world so determined to marginalize, dehumanise, and criminalise us – especially trans women, and especially Black, brown, and indigenous trans people.

Read the full call out at: transprisoners.net Come celebrate the new year and send some love through the prison walls. After this year’s fierce revolt against the police and white supremacy, we cannot forget all those held captive by the state. Let’s make some noise for everyone behind bars!

Come enjoy foul-mouthed radical news from the subMedia crew. We’ll show the last few episodes of “Its the end of the world as we know it and I feel fine”. Hoping to laugh, chill, and eat tacos. 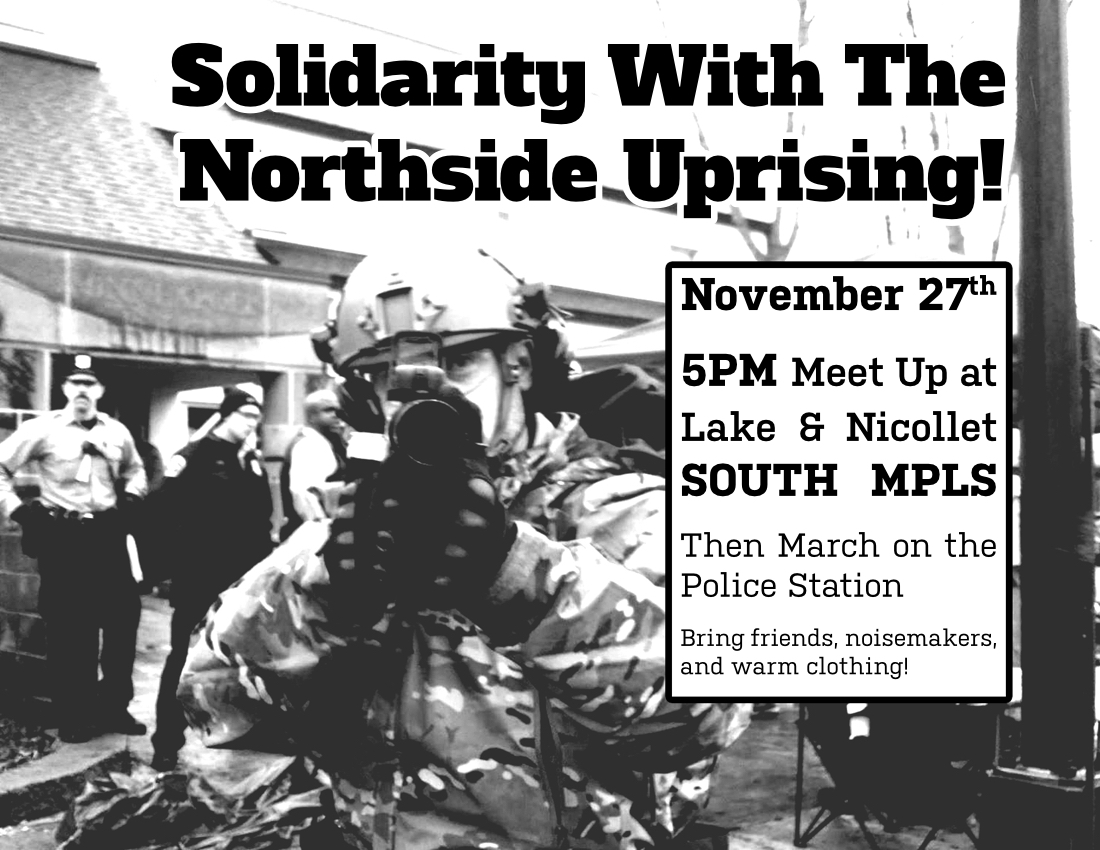 This past week, those on the Northside have inspired us with their courageous resistance to police violence. On Friday, we will take to the streets as a demonstration of solidarity with their struggle. The Southside is no stranger to police violence either, so we will heed the unspoken call of the Northside rebels and march on the police station. Meet up at 5pm at Lake & Nicollet! 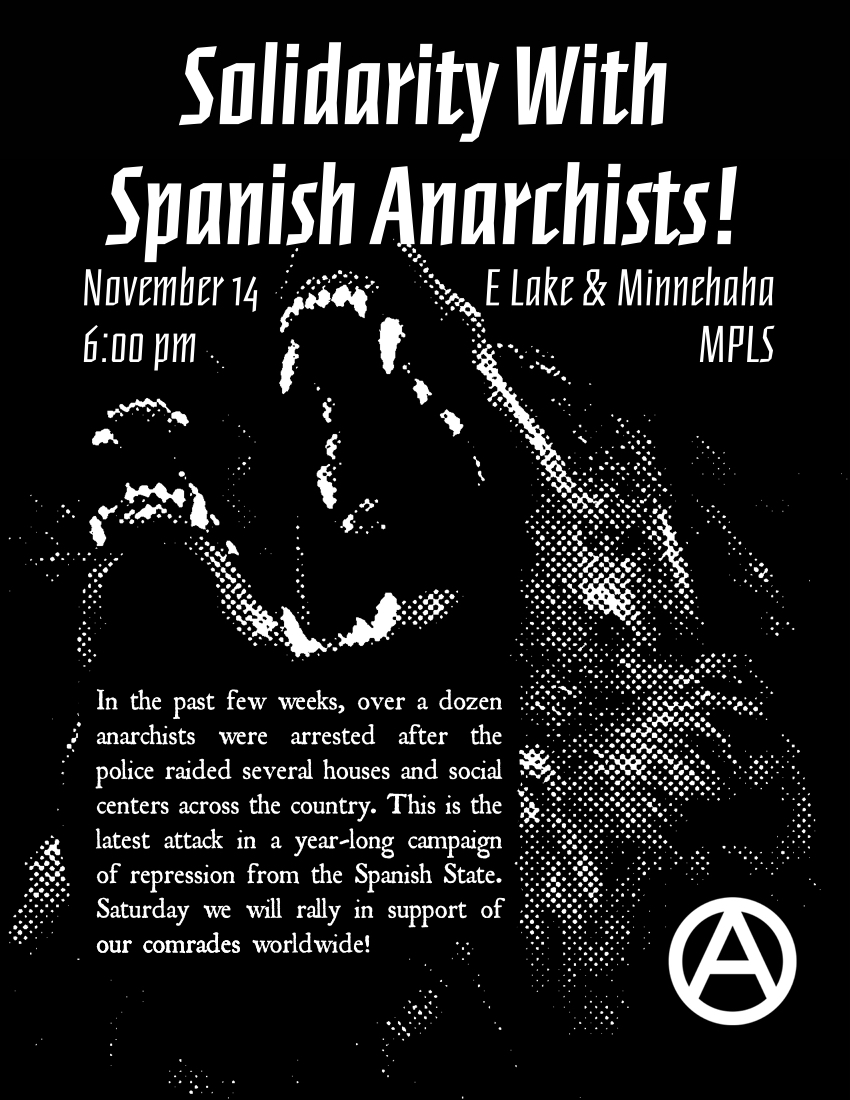 Almost a year ago, the Spanish State began a campaign of repression against anarchists, arresting dozens, including nine in late October, and five more in November of this year. Their imprisonment is justified with the invention of a fictional terrorist group, the GAC-FAI-IRF. No attack has ever been claimed with this set of acronyms, and the GAC (Coordinated Anarchist Groups) are only the authors of a recent book, Contra la Democracia (eerily similar to the Tarnac Affair and The Coming Insurrection in France, 2008.)

On Saturday we will rally in solidarity with those arrested, at 6:00pm at the corner of E Lake St & Minnehaha Ave in Minneapolis. 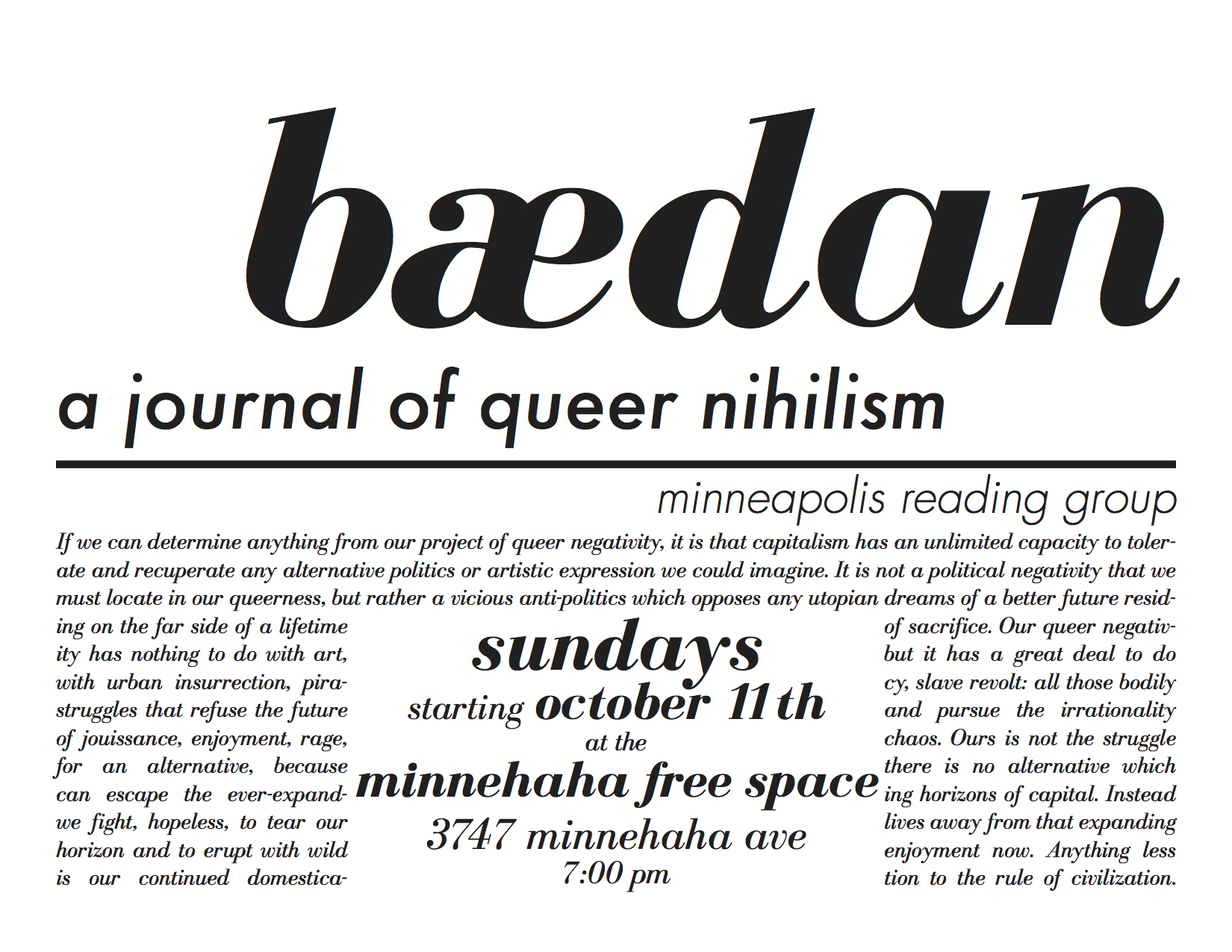 If we can determine anything from our project of queer negativity, it is that capitalism has an unlimited capacity to tolerate and recuperate any alternative politics or artistic expression we could imagine. It is not a political negativity that we must locate in our queerness, but rather a vicious anti-politics which opposes any utopian dreams of a better future residing on the far side of a lifetime of sacrifice. Our queer negativity has nothing to do with art, but it has a great deal to do with urban insurrection, piracy, slave revolt: all those bodily struggles that refuse the future and pursue the irrationality of jouissance, enjoyment, rage, chaos. Ours is not the struggle for an alternative, because there is no alternative which can escape the ever-expanding horizons of capital. Instead we fight, hopeless, to tear our lives away from that expanding horizon and to erupt with wild enjoyment now. Anything less is our continued domestication to the rule of civilization. 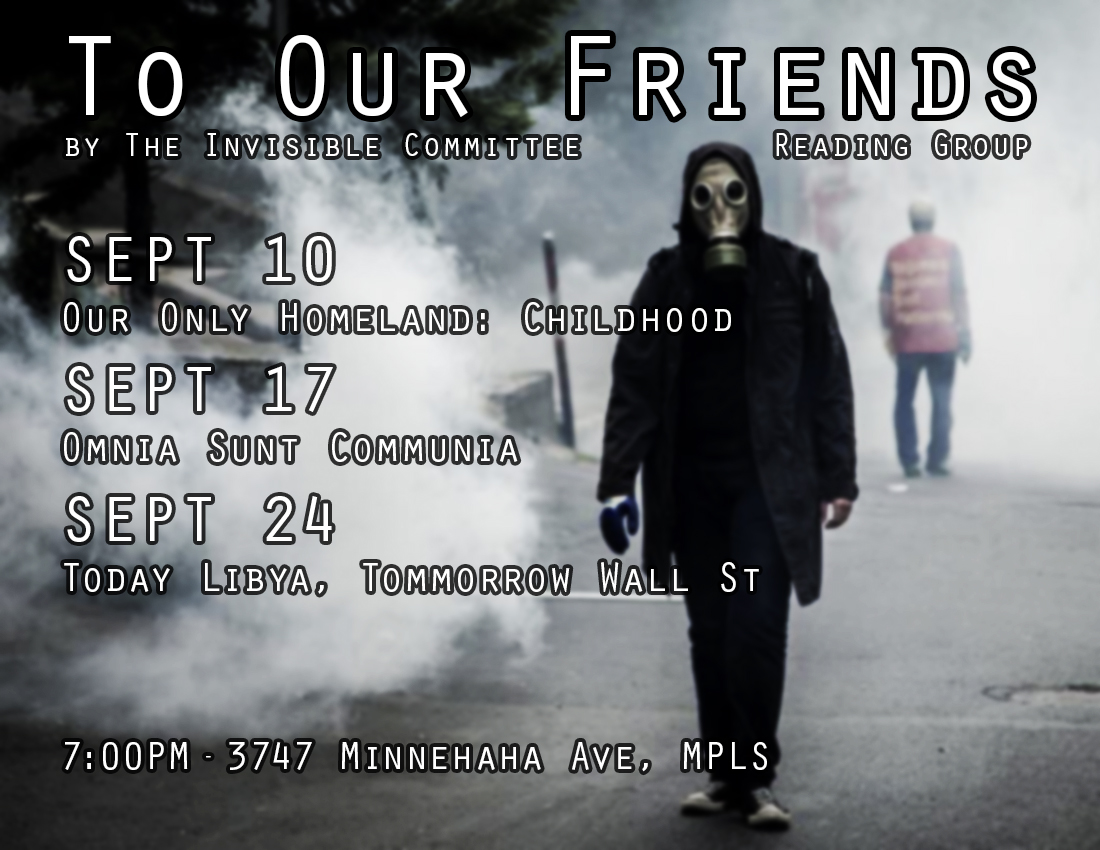 We will be reading each chapter aloud, although no one is obliged to speak. We would like to encourage pauses for discussion at any point.

Copies of the full text will be available, including plenty of extras to take with and distribute amongst friends and co-conspirators.

“Organizing has never meant affiliation with the same organization. Organizing is acting in accordance with a common perception, at whatever level that may be. Now, what is missing from the situation is not “people’s anger” or economic shortage, it’s not the good will of militants or the spread of critical consciousness, or even the proliferation of anarchist gestures. What we lack is a shared perception of the situation. Without this binding agent, gestures dissolve without a trace into nothingness, lives have the texture of dreams, and uprisings end up in schoolbooks.”

This reading group will be an attempt to develop this shared perception of the situation. We will be reading “To Our Friends” by the Invisible Committee, the infamous authors of “The Coming Insurrection” in 2007. More information on the book can be found here.