Twice this summer, the Metro Transit Police Department has come under fire (figuratively) for so-called excessive force. The latest incident involves a black teenager with autism being given multiple seizures by cops. On the morning of Sunday the 20th, dozens gathered to protest this act of police brutality by shutting down the light rail. The shut down—timed to interrupt people traveling to the opening game of the Vikings—is the latest in a series of seemingly militant actions to emerge from the Twin Cities-area Black Lives Matter movement. Yet, like the rest, ended up being more media spectacle than substantive action.

The march route, from Lexington Parkway to the St. Paul Police Western District building and back, had been pre-disclosed to the police in order to ensure, supposedly, people’s safety. This is quite similar to another action earlier this month aimed at disrupting the Minnesota State Fair:

City officials said at a news conference Friday that an “open line” of communication is in place between police and protest organizers and that they shared an expectation that the demonstration would unfold safely, leaving no reason for the public to stay away” (Corporate news)

It certainly begs the question why no one should stay away if the purpose is to disrupt the fair, but we know better than that. The purpose is to draw attention to their issues, and their organizations. Under the veil of militant disruption, often said to be “hitting them where it hurts,” these groups obtain their desired media coverage without any actual hindrance to the system’s functioning. As the corporate media summarizes:

Metro Transit replaced the shut down light rail lines with buses between [the affected] stations. Staff from Metro Transit were on hand to direct customers.
“It is very similar to what would take place during a mechanical failure that might cause a delay, a car stuck on our tracks or some other disruption,” said Metro Transit spokesperson Howie Padilla.

Organizers also attempted to prevent conflict between the crowd and a handful of white supremacists—politely called Three Percenters—that seemed very upset about missing the Vikings game. While one of their flags did end up disappearing, the tactics of the organizers succeeded in disempowering people from being able to concisely handle them. These tactics included the verbal berating of those who moved to confront them, and in some cases using their bodies to physically protect the white supremacists when people got too close. This is likely not because they cared for the well-being of racists, but because an escalating situation means that they lose control of it. The more peaceful and passive people are, the more the organizers maintain control, and by extension, so do the police.

This model; a model of demands, media coverage, raising consciousness, and making them listen to us, is presented as our only option. It has practically monopolized the entire local terrain of struggle. The following text is from a flyer distributed along the march (adapted from It’s Going Down) that so succinctly clarifies the flaws in this model of protest:

IF I DIE IN POLICE CUSTODY BURN EVERYTHING DOWN

Since the uprising in Ferguson, everything has both changed and remained the same. While activists praise their efforts to change the conversation and perhaps achieve the implementation of certain reforms—body cameras come to mind—the functioning of white supremacy continues on, unrelenting. Over 1,100 people have been killed by police in the United States since Mike Brown.

After the rebellions that erupted in Ferguson, and then in Baltimore, the non-profits and their bureaucrats have been forced to adapt to the changing climate of militancy in the streets. For them, however, revolt becomes a means of winning the same useless reforms as before. Indict the killer cop, or else. Pass this civil rights law, or else. But we see a world beyond that. There is nothing those in power can offer us that will truly solve our problems, and every demand only reinforces their control.

When people revolt in the streets, they are directly attacking what brings misery to their lives: the police that harass, arrest, and in all likelihood will shoot them, the businesses that force them to work to survive under capitalism. They block highways, trains, and streets; the material systems that facilitate the domination of our lives.

We don’t do this to force the hand of our oppressors, we do this to find an escape from oppression entirely. But we must learn to sustain ourselves without relying on the very systems we attack. Across the world, people have liberated space, such as houses, gardens, squares or entire territories. In the squats of Athens and the fields of the ZAD, in Tahrir Square and the Mi’kmaq Blockade, rebels are finding ways to build a life worth living.

“Wherever the economy functions, it is impossible for us to determine our lives for ourselves.

The value of the blockade isn’t found in the message it sends, but rather in the direct ways it blocks the machinations of capital and makes space for our own activity.”

Update: A contributor submitted this photo confirming that the speaker attached to the SPPD vehicle was not an LRAD. 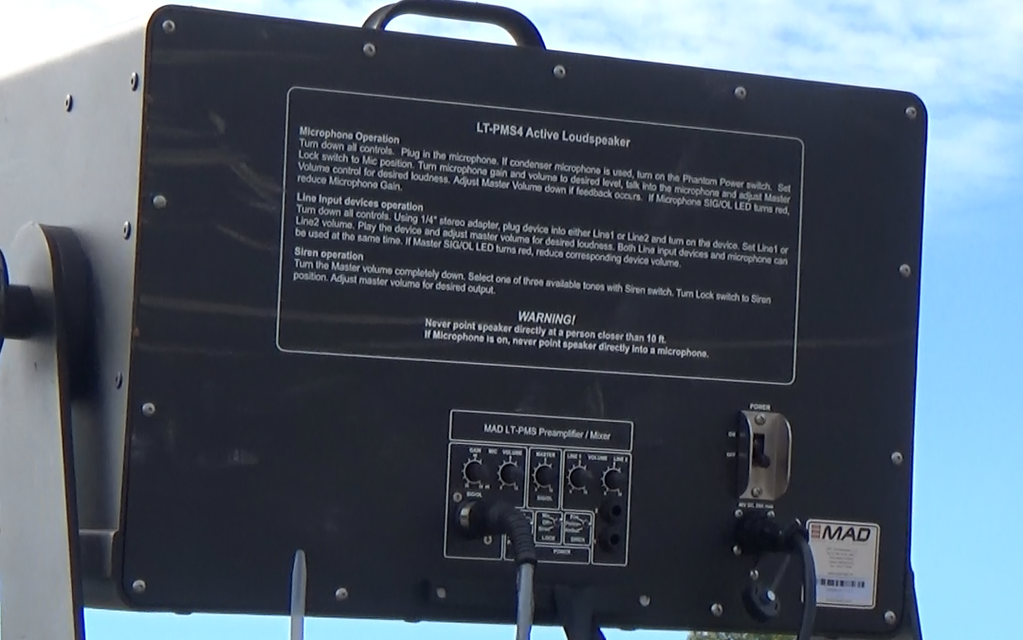 Or so says a community organizer within the Black Lives Matter movement. And a number of so-called community leaders would agree. But this acknowledgement is followed up by solutions to make sure that it doesn’t. The list of demands, whether body cameras or better jobs, the protest marshals placed between the cops and ourselves, all tools to prevent things from getting out of control. Quite often they don’t even attempt to hide the fact that they are de-escalators. And here is where the community leaders find themselves shoulder-to-shoulder with the police—both working just as adamantly as the other to eliminate unrest.

Indeed, many participants of the recent “Emergency Shutdown” action in St. Paul actually felt keen on shaking an officer’s hand as he walked freely through through the timid crowd. And despite the call to shut down the streets, a number of so-called allies actually took to picking back up construction equipment that had been knocked over to stop traffic. Minor stoppages occurred along the Green Line, but the event remained entirely contained by the organizers and their designated de-escalators. Instead of blockage used to physically interrupt the material functioning of white supremacy, it is used to draw attention to the cause. Not so different from last month’s solidarity march for Sandra Bland, invoking her mother’s call for “war”, but failing to go beyond an empty media spectacle.

The riot, on the other hand, becomes the last-resort threat in order to force concessions. But liberation from the systems that oppress us cannot be found within the realm of politics. There are no laws that can grant us liberation, no politicians that can promise it us, no amount of reforms that could possibly address the basic operation of the forces that control our lives. Instead, they are used to restore peace, by which they mean order. Therefore, every maneuver on the field of politics can be understood as an attempt to delay our liberation.

Instead of attempting to dissect why certain people try to manage dissent, we find it much more fruitful to sketch a way out. As mentioned earlier, blockage has emerged as an instinctual response to police violence. To block the flows of the city is to interrupt the physical processes through which forces of domination manifest. The riot allows for these blockades to multiply: blocking roads and trains with dumpsters and debris instead of leaving our bodies vulnerable, blocking police operations with projectiles, while also providing the opportunity to directly attack the structures of our enemies and temporarily claim territory as autonomous. We must also learn how to expand beyond the riot as well, pushing the limits until there is no going back.

Minneapolis can indeed burn just like Baltimore, and everywhere else too. It takes confidence, effort, and intention. We certainly aren’t devoid of reasons to revolt, two people have been shot by police in the Twin Cities in the past month. Police shootings are the culmination of so many other, more subtle forms of oppression, and it’s unfortunate that at the current moment we seem to be unable to act before tragedy strikes. Yet, it won’t matter when we act if we cannot escape the impotent symbolism that activism has accustomed us to. 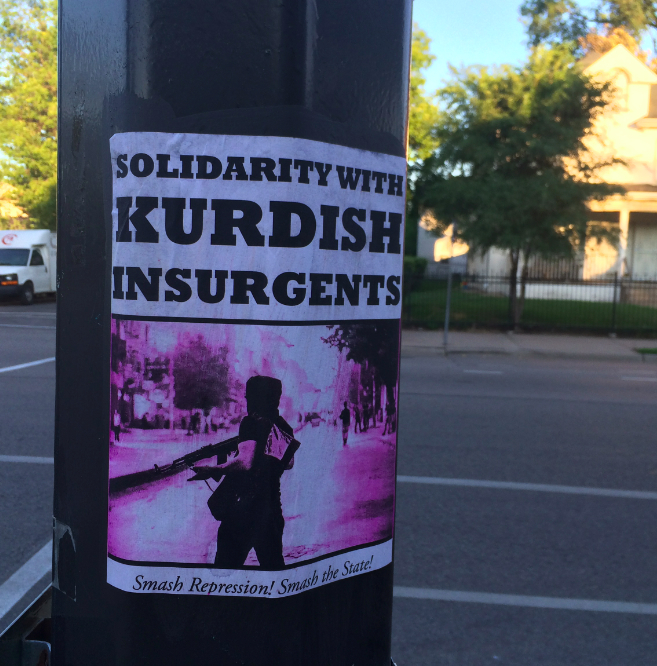 Some posters expressing solidarity with Kurdish insurgents were flyposted around south Minneapolis. 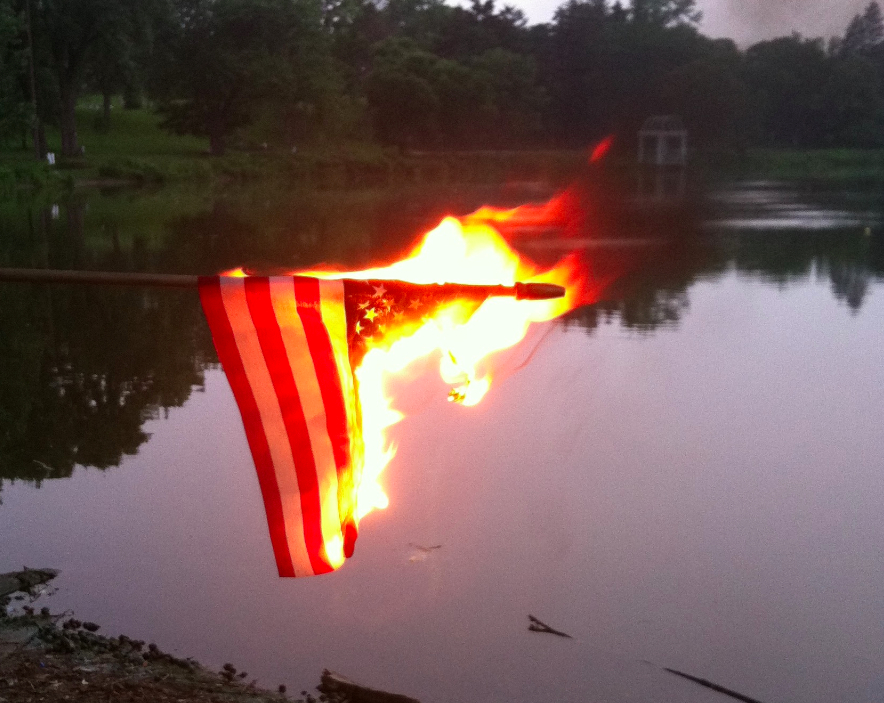 A number of American flags liberated from the neighborhood found themselves burnt to ashes on the 4th of July. This was a small gesture of solidarity to all those in struggle against domination. America, as any system of exploitation, cannot be reformed, only obliterated.

Nevertheless, this constitutes nothing but a symbolic gesture. Burning the flag does not burn white supremacy, it does not burn the myriad of oppressive systems that so many of us see clearly in the stars and stripes. Much of the country has their attention drawn to the outcry over the use of confederate logos and other symbols that represent this oppression. While it is worth noting how deeply embedded white supremacy is in the history of the United States, we must set our sights on the material, not the symbolic.