My, how this month has flown by! I have been so busy bringing the queer insurrection; I’ve hardly had time to write everything down. Where to begin…

When the Human Rights Campaign (HRC) held its annual Gala Dinner and Silent Auction Saturday, Sept, 12th, autonomous queerz Bash Back: Twin Cities, The Revolting Queers, and the Twin Cities Avengers were there to welcome them even though we had not been invited and had no intention of paying the $200 entrance fee.

This year’s Gala was themed “Speak the Truth”, a truth which congratulated rich gay celebrities and gave them expensive “visibility” awards, while Duanna Johnson, Leeneshia Edwards, Tiffany Berry, & the thousands of other murdered transwomen didn’t even receive an honorable mention…

It was clear from the bourgeois atmosphere, and the serious lack of dancing that this Gala was meant to be some sort of overpriced support group for whiney elite gays and lesbians, to express their dreams of a bigger prison industrial complex (hate crime legislation), heteronormativity (gay marriage), and more state militarism (don’t ask, don’t tell).

But Bash Back! Twin Cities, was fed up with the ridiculous state-lovin’ of the HRC lobby and its distance from our own lived realities, so we decided to do what all rich queerz do in a time of crisis; we got gay married! The Gala had been billed as a “festive, all styles welcome event” so we dressed in our hottest wedding attire and stormed into the dinner.

Despite heckling from HRC security, we stood our ground and held a brief marriage ceremony and handed out leaflets inside. Before the HRC corporate hacks could push us out the door we were able to read the following vows:

“Do you, Bash Back! Twin Cities, take one another to be insurrectionary radical queerz, to resist and to liberate ourselves from all systems of domination, for glitter and for cupcakes, for unicorns and for rainbows, in genderless bathrooms and in the streets, in love and in rage, from this dance party forward?”

“We do!” We held our wedding reception dance party outside and consumed our marital cupcakes to the beats of Janet Jackson, Cher and Lady Gaga. We look forward to the HRC inviting us to its annual Gala next year for our one year anniversary.

On October 11th we glamdalized a bridge the night before it was used for a local “equality” rally in conjunction with the National March for Equality in DC. The bridge was beautified with phrases such as “Liberation Not State Sanction – No To Heteronormative Assimilation”. During the rally, we attached a banner to the bridge that read simply “Liberation not Assimilation!” This action was not only meant to disrupt the complacent rally for (rich, white, homonormative) gay and lesbian “rights” but to also coincide with National Coming Out Day.

Bash Back! Twin Cities resists National Coming Out Day because it is reformist and forces the production of gender-deviant subjects into rigid identity categories that do not disrupt the regime of white heteronormativity. BB! Twin Cities asks the questions “Who gets to ‘come out’ and “why are there so few identity choices when you do”? BB! Twin Cities rejects the idea that your sexual practices equals your sexual identity and asserts that any group that thinks this is true needs to check its cultural privilege. We disagree with mainstream LGBT movements in general because they reinstate systems of domination through their state-sponsored tactics and politics and frankly their inefficiency to yield material change is simultaneously enraging and a snooze cruise.

On Saturday October 17th, Bash Back! Twin Cities organized a radical queer bloc to confront a racist neo-Nazi rally in Austin, a small town in Southeastern Minnesota. Aside from making the counter-demonstration more fierce and fabulous, the National Socialist Movement Twin Cities Unit Leader Corporal Erik Flann was successfully glamified with a green glitter bomb on their disgusting Nazi uniform. 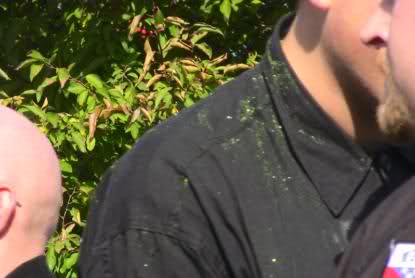 While one of the Nazis hit a demonstrator’s hand and broke their camera and another showed up to the rally with a stun gun, baton, and body armor – not surprisingly – the police were only interested in going after counter-demonstrators while protecting the Nazi scum.

The police indiscriminately pepper-sprayed the crowd a few times and made three arrests. The first person arrested was an Austin local who tripped over the Nazi’s loud-speaker while the crowd was trying to move forward. The second, was a Bash Back! member who police allege threw a glitter bomb at Eric. The third, was a Bash Back! member, and was arrested for simply telling police that he was not a “ma’am”, that he was a transboy, when an officer asked him to “Get back ma’am”.

he two Bash Back! members arrested were charged with disorderly conduct, unlawful assembly, and obstruction of legal process. We need your help to raise money to cover their legal expenses. Please check out the support website we set up at: http://bashbacklegal.weebly.com/