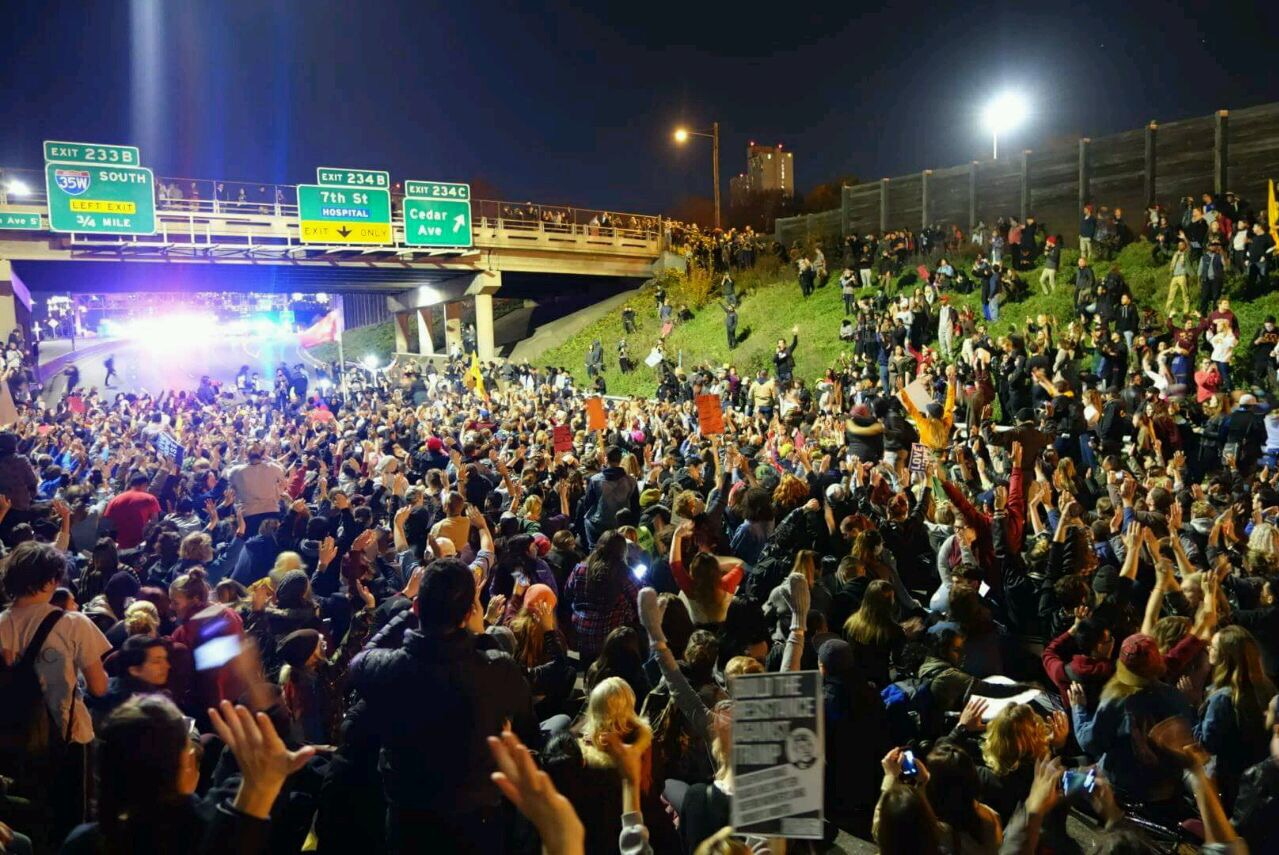 Last Thursday night, Socialist Alternative and other left-wing and progressive nonprofits and political parties (Neighborhoods Organizing for Change, Students for a Democratic Society, and more) held a demonstration to protest the election of Donald Trump to the presidency. The crowd was huge, bigger than any march I’ve seen in Minneapolis in a while. In fact, the last time I saw a crowd this big it was the march put on by what would eventually become Black Lives Matter the day after a grand jury announced its decision to not prosecute Darren Wilson for the murder of Mike Brown.

I go into this march with my own reservations about participating in a Socialist Alternative action, knowing that they are not for confrontational tactics and tend to only have photo op “actions” to appeal to their fanbase of well off progressive white people who probably voted for Bernie. But upon seeing the crowd and the fact that many people’s reactions to myself and my affinity group all wearing masks was a positive one (or became positive once it was explained) has me feeling optimistic. Maybe the sheer number of people at this march, about 5,000 or so I’d say, will be too much for the parade marshals to handle? Maybe people will be able to carry out some creative actions that up the ante and make a clear statement that we reject not just Donald Trump but the sham of capitalist democracy altogether? Maybe it’ll fuckin’ pop off? These are all the questions my affinity group had been asking each other while chain smoking cigarettes and waiting for the march to start. 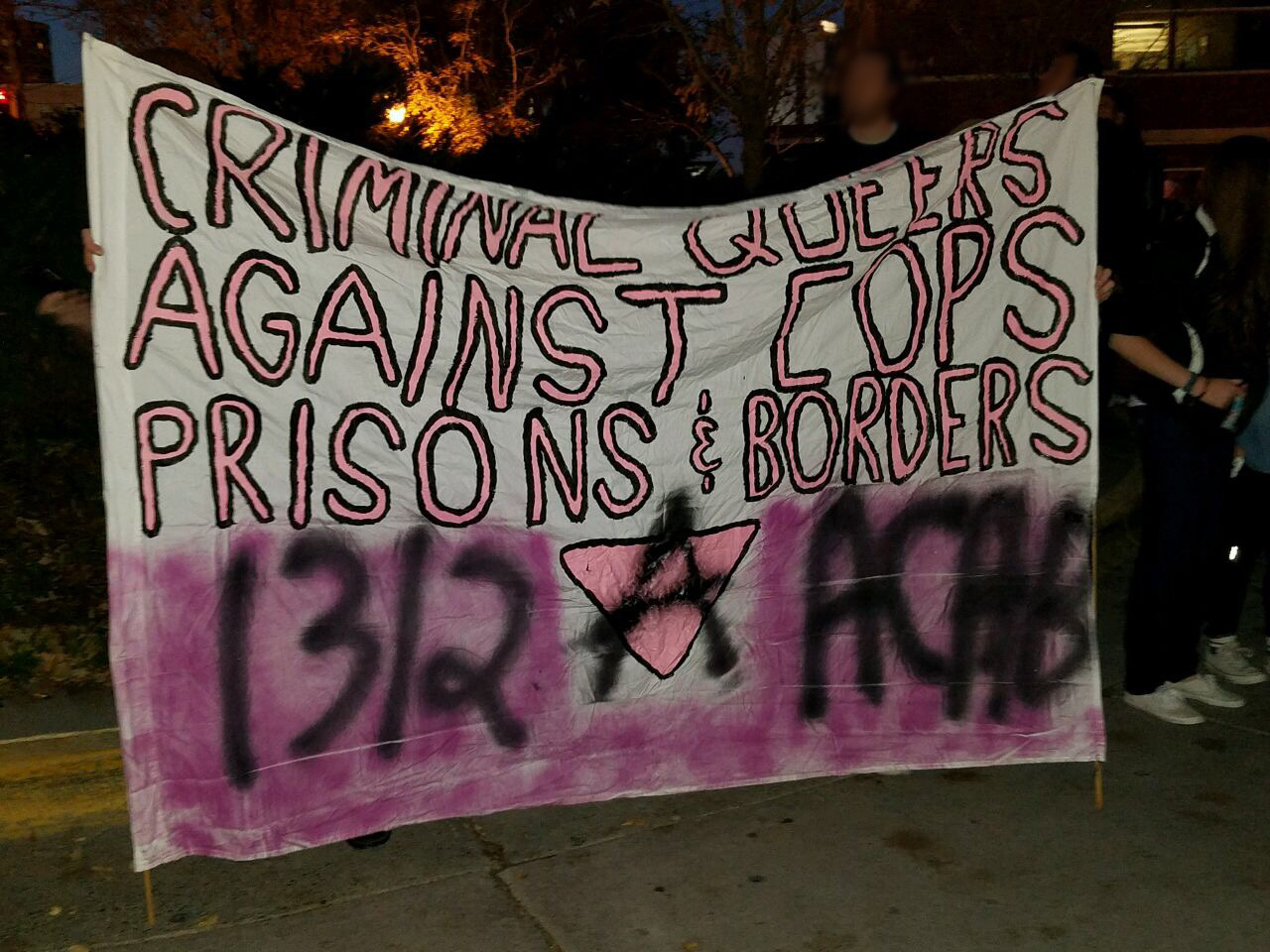 We finally get out on the street, and the size and scope of the crowd becomes even more apparent to me. After a few more minutes of speeches, we finally start to march. The march kicks off and almost immediately it is greeted with applause and excited cheers. The march was in the Cedar-Riverside neighborhood, a neighborhood known for its large population of East African immigrants, some of them refugees fleeing conflicts the United States is fueling in Somalia and Ethiopia. Chants of “say it loud, say it clear, refugees are welcome here!” are met with raised fists and cheering from the neighborhood’s East African population. This was a really nice sight to behold and it was great seeing a neighborhood I spend so much time in coming out to the streets like this. Here’s hoping it happens again soon.

The march is stopped on Cedar Avenue right in front of Palmer’s bar and the Cedar Cultural Center. I’m confused. Why are we stopping? Soon I see marshals telling people to make room for cars to drive through. This is stupid. Absolutely stupid. If the job of the parade marshals is to supposedly “keep us safe” why are they letting drivers through the crowd? While most of the drivers had passengers hanging outside the windows with their fists up in support and nothing happened, what if one of these drivers was a Trump supporter and decided to run us down? Later on I discover that the march had been stalled to allow our real escort, the Minneapolis Police Department, time to catch up and learn our route. Infuriating to say the least, but predictable behavior from Socialist Alternative.

The march kicks off again, this time bound for the GOP Headquarters in the Seward neighborhood just barely a mile away. The march remains largely tame, with the Twin Cities IWW General Defense Committee occasionally starting up more militant chants or changing “not my president” to “no more presidents” only to be immediately shut down and called “outside agitators” by marshals in yellow vests. Again, predictable behavior coming from Socialist Alternative. At this point, it should be very blatantly obvious that the official “left” in Minneapolis, the protest and movement managers, have no interest in showing meaningful opposition to a genocidal social order. Instead, they’d rather be the loyal opposition with occasionally fiery rhetoric, padding the resumes of would-be city councilmen and women, future interns for the DFL, or perhaps even a chance at landing on the board of directors of some progressive nonprofit. As such, while there is potential in intervening in marches and actions put on by these organizations and pushing for militancy or supporting already existing radical elements (case in point, the pitched street fighting on the night of November 18th during the Black Lives Matter occupation of the 4th Precinct) what should be expected from these organizations is a very strictly choreographed protest theater performance.

Upon arriving at the GOP headquarters, things start to get interesting. I hear some cheering and some people saying “stop that shit!” I look over and see that the GOP headquarters now reads “FUCK TRUMP” in black spray paint. Whoever you are invisible, anonymous graffito, I salute you. As we’re standing around in front of the GOP headquarters I can overhear a few arguments, with some of the protesters calling the vandalism of the GOP headquarters “violence.” This is pretty ridiculous, but with so many of the participants being first time protesters by their own admission, it makes sense that their first taste of seeing a small, symbolic act of resistance is met with immediate opposition. We’ve been conditioned to believe that as long as we are respectable, as long as we are peaceful, and as long as we give coherent demands that power will listen to us and give in to our demands. I was at that point once and after the dust settled from the eviction of Zuccoti Park and the death of Occupy I no longer had any faith in the State, capitalism, or any of the protest managers. I attempt to explain why people might take action such as this small act of vandalism and that the police will brutalize us regardless of whether or not we spray paint a few walls, peacefully disrupt traffic, or start tearing shit up and turning over cop cars. The police will only tolerate even the most peaceful protest for so long before the tear gas, pepper spray, and batons come out. To assume that protesters who take militant direct action deserve whatever police violence eventually comes down on them is not only victim blaming, it also hurts the movement itself. In light of a Trump presidency, our only enemies should be the police who will enforce Trump’s laws, the capitalists who will profit from Trump’s rule, and the liberals and protest managers who will collaborate with Trump’s regime. We all need to get very serious about resisting fascism, and if people are scared of or upset by a little spray paint we got a long way to go.

The march continues winding through Seward. As we pass by the onramp to get onto I-94, a crowd surges towards it. Parade marshals urge people to continue marching down Riverside avenue and to stay away from the highway. These pleas are ignored. More and more people sprint towards the highway and soon a few hundred people have taken over one, then two, then four, and eventually all 8 lanes of I-94. Tactics honed over the last 2 years of anti-police brutality demonstrations were put to good use. Once on the highway, the march takes on a different tone. Marshals have briefly been outmaneuvered and the police are nowhere to be found. I see “fuck Trump” graffiti on just about every flat surface and start laughing. 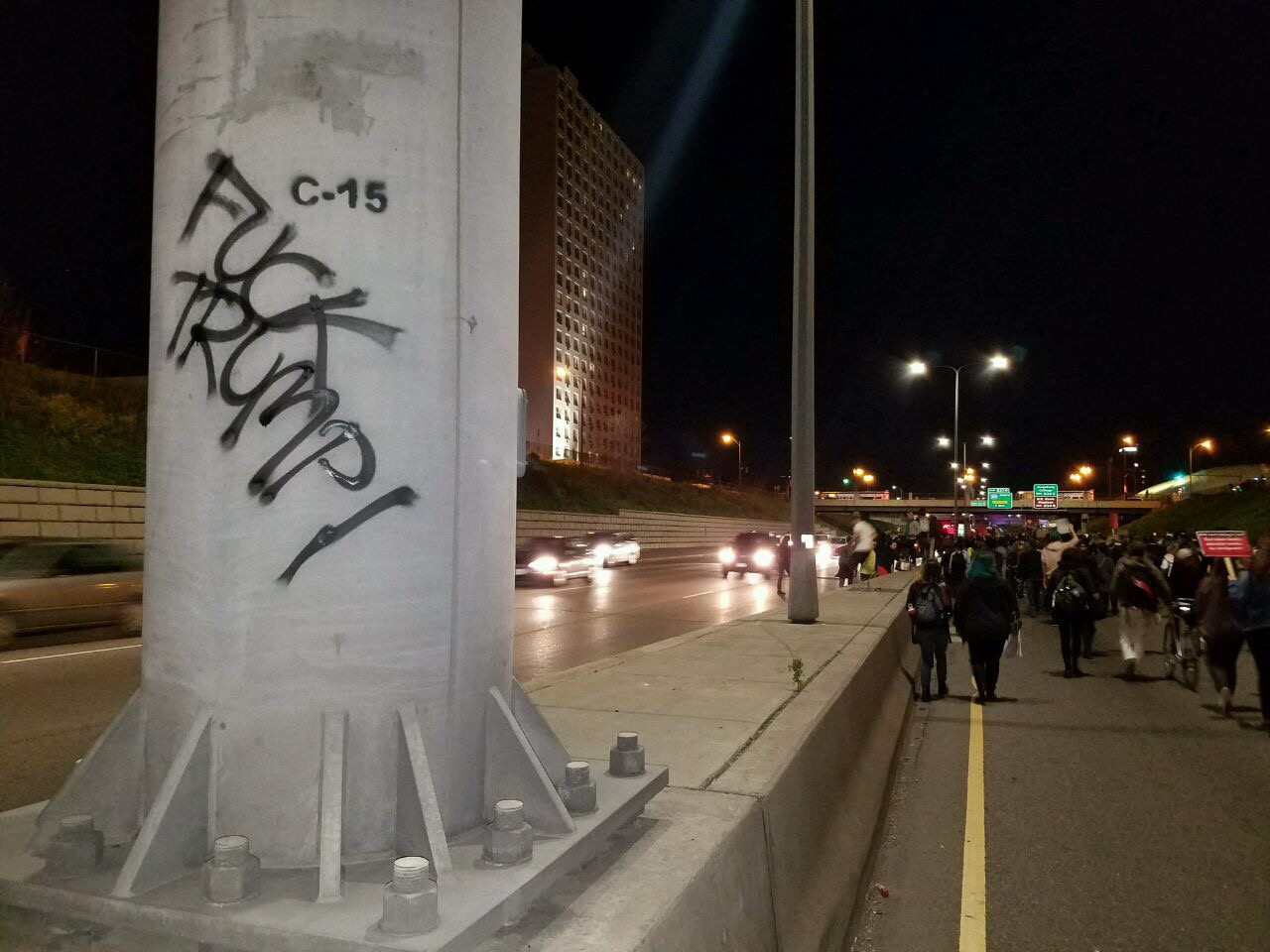 As we continue marching down I-94, I am excited but also nervous. The last time I was on this highway I was in St. Paul on July 9th and a flashbang grenade went off just a few inches away from my face. Having those traumatic images still fresh in my mind, once we’re in sight of the police line I am hopeful but still more than just a little worried about what might follow. Protesters link arms and begin marching towards the police. The exit ramp to get back out onto the street and wind up back where we started in Cedar-Riverside is still unblocked at this point. Another exit ramp is also not blocked, and the only police vehicle visible is a paddy wagon not nearly big enough to contain all 3,000 of us or so still on the highway. But before we could even directly confront the police and possibly clash with them, marshals run to the front and begin demanding that we stop, in the name of “keeping everyone safe.” Police soon have us completely cut off and the only way out is scrambling up a hill. I see that marshals are negotiating with police. After a thirty or forty minute standoff, the police eventually allow us to leave through the exit ramp that put us right by the Triple Rock Social Club and back in Cedar-Riverside. My affinity group disperses and we regroup at a comrade’s home, debriefing, unwinding, and plotting for next time.

The next few years of a Trump presidency are going to be interesting to say the least. The thin veneer of compassion and respectability that is neoliberalism has been pulled down to reveal the brutality and barbarity of capitalism. A resurgence of extreme nationalist politics is gaining ground in countries that have been ravaged by neoliberal policies. At the same time, combatants have brought the struggle to new heights of intensity in places like Greece, Spain, England, France, and now the United States. If the past 8 years of an Obama presidency gave us Ferguson, Charlotte, Baltimore, Milwaukee, the prison strike, Occupy Wall Street, Standing Rock, and the G-20 and NATO counter-summits, what will a Trump presidency bring? What new levels of repression should we expect? What is rebellion going to look like under Trump? These are the questions we asked ourselves after the march and going forward they are questions we should all be asking ourselves as we prepare for Trump’s presidency. However, we must also remember that regardless of who is in office, capitalism will still be capitalism, white supremacy will still be white supremacy, and cops will still be fucking cops.

Whoever they vote for, we are ungovernable